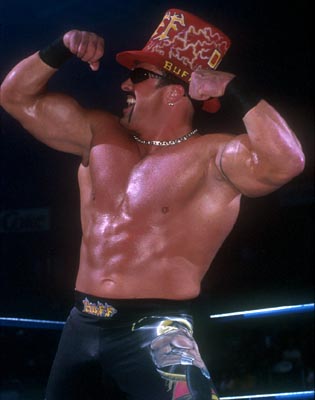 If you missed the March 22nd edition of Online World of Wrestling Radio with host Alan Wojcik, contributors Spug of Wrestle Talk Radio & Jim Varsallone of the Miami Herald; here’s the highlights:

Our 100% free to the listener interviews of the evening were part of WCW Takeover with former Monday Nitro commentator Scott Hudson & former WCW superstar Marcus “Buff” Bagwell. Both men spoke on their time working for Eric Bischoff, Ted Turner, the great moments of the NWA & WCW Nitro eras & their favorite road stories. If you listen to the download, Mr. Hudson’s interview is first followed by Mr. Bagwell.

After the 90 minute long interviews, the program moved to a review of last Thursday’s TNA iMPACT which was not very good. After a audio message from the recently departed Mase (not deceased, just got a full time job), the focus shifted toWWE Monday Night RAW & Friday Night SmackDown! as we inch closer to April 3rd and WrestleMania 27. Jim Varsallone was a surprise call-in guest to offer his thoughts on his favorite WCW memories, who should be going into the Hall of Fame in Atlanta and next year in Miami, what other WrestleMaia 27 matches he would like to see and more. Sir Rockin even got involved when Alan asked the trio who should be the one to end the Undertaker’s WrestleMania undefeated streak, the answers will surprise you and might even be heard in Stanford.

Remember Tuesday March 29th will be our WrestleMania 27 preview show with your favorite media contributors and your calls.  In addition we will finally be speaking with former WWE & WCW superstar Sid Vicious about his role in the soon to be released “River of Darkness” starring Sid, Kevin Nash, and Kurt Angle.

WTR and OWW remind you if you missed any of the previous WrestleMania Memories interviews with Road Warrior Animal. Jerry “the King” Lawler, Brutus “the Barber” Beefcake, George “the Animal” Steele, “the Genius” Lanny Poffo or Serena Deeb; you can download them now by following our archive links below to ClickWrestle On Demand or the iTunes Store. Did we mention IT’S FREE!!!

You can  get this and other past shows, by logging onto www.clickwrestle.com/podcasts/owwradio. ClickWrestleVideo On Demand is also home to thousands of matches from around the globe. The show can also be found on iTunes http://itunes.apple.com/us/podcast/oww-radio/id334739148?ign-mpt=uo%3D4. Best part it’s FREE!!

Online World of Wrestling is produced by Wild Talk Radio,www.wildtalkradio.com where you can sign up for the WTR Newsletter. On the go and can’t listen to WTR programming at home, log onto wtr.wirenode.mobi on your mobile device’s web browser.

Wild Talk Radio is the home to the following outstanding programs, all times are Eastern:
Sunday 10pm (11 on a PPV night) Wrestle Talk Radio with Tim Stein, Mase, Spug, Will and Omega.
Wednesday 9pm Otaku Talk (Geek speak) with Spug, Mase and Omega
Thursday 11ish Anything Goes with Syndy Synn (www.syndysynn.com) and Sir Rockin
Saturday 12amish CB Radio with Sir Rockin, Subway & “the Godfather of Extreme” Rob Parks
OTL’s Mase is featured on a podcast called “Bashing the Books” that you can check out. From Tapouts to Knockouts with Spug & Mase will take to the airwaves on nights the UFC and Strike Force hold events.
?