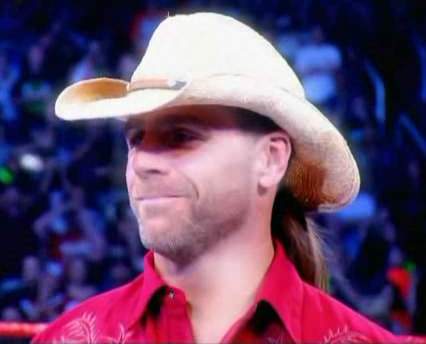 Former WWE Superstar “The Heartbreak Kid” Shawn Michaels stepped inside the WTR Squared Circle this past Wednesday to talk about his his charity auction for how you can win a chance to Meet Shawn Michaels and see him get inducted in to the WWE Hall of Fame, along with more memories from his WWE Career.

On deciding who will induct him in to the WWE Hall of Fame.

“Its one of things where I find myself debating whether I make it different or do what I want to do or do I make it interesting or do I make it controversial, its hard for me to get out of the performance mode, they keep telling me its about you just enjoy it, its just hard not to feel like people are expecting something. Its hard for me not to think that I have to do something and I have had a tough time narrowing down whether I am just going to enjoy it or make it a performance.”

On how Shawn Michaels & Chris Jericho came up with the aftermath of their Wrestlemania 19 Match Up.

“I always likened it to Godfather 2 when Michael Corleone kisses Fredo and says I knew it was you. We thought about numermous different things and I said how about nothing works better than a swift kick to the nuts.”

On working with Chris Jericho

“One of the sheer joys he and I had, we both love sitting around with each other and coming up with things to make things just a little better and really get in to the creative process.”

Other subjects include who has the better Elbow Drop between Shawn Michaels and Randy Savage, working moves that other superstars in the past in to his Wrestlemania Matches, more on working with Chris Jericho and who Stan actually was and his thoughts on some of the DX Skits, along with talking about all of the charities he is working with.

You can catch the Shawn Michaels interview on demand at www.wildtalkradio.com in the archives section, along with checking out our wide variety of interviews we have conducted recently as we lead up to the Road to Wrestlemania with the likes of Road Warrior Animal, Jerry “The King” Lawler, George “The Animal” Steele, Rick “The Model” Martel and more! As well you can check out all of our daily programming by logging on to www.wildtalkradio.com, which includes shows such as CB Radio, Otaku Talk Like, Online World of Wrestling Radio and the Iconic Wrestle Talk Radio, which will be your home for complete Post Show Coverage once Wrestlemania 27 is off the air on Sunday Night April 3rd, 2011.