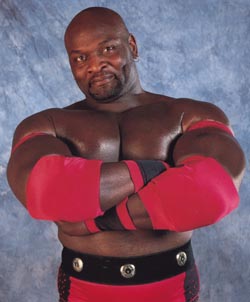 Former WWE Superstar Ahmed Johnson was interviewed by David Diaz of The Wrestling Mania Show. Here are some highlights:

Jeff Jarrett: “I didn’t like working with him. He wasn’t like Shawn Michaels, he’d complain if you hit him too hard. He didn’t want to put anybody over, and on top of that, man, he was a racist son of a bitch. Really racist.”

Goldust kissing him: “He agreed to kiss my hand when we practiced it, but when we got out there. Man…. he kissed me harder than any female has ever kissed me. I’m talking your husband’s going to the military and he’s never coming home kind of kiss, and that just PISSED ME OFF.”

Never becoming WWF Champion: “I was going to face The Undertaker for the title. I found out through Vince Russo that we were gonna do that match, and he told me that some of the people at the booking table told him that the WWF were not ready for a black champion. Can you believe that shit? F**k that. More of that racist shit coming to surface. And there was a lot of it.”