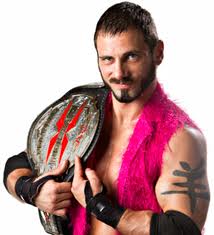 TNA Impact Wrestling will be live at the Maryland Theatre tonight as part of the Impact Wrestling World Tour and will feature three championship matches in addition to Magnus taking on one of TNA’s more accomplished stars, Austin Aries.

Aries is a well-traveled professional wrestler and one of six TNA wrestlers to hold the distinction of being a TNA Triple Crown Champion, having held each of the TNA World, X Division and Tag-Team championships during his career.

As Aries prepares for his match tonight, he’ll have to take into account the unique setup of the Maryland Theatre. The ring will be constructed atop the theatre’s stage and will be noticeably different from what he is primarily accustomed to.

“It’s a challenge,” Aries said, “because you’re used to the fans being all around you and not just directly in front of you. It makes some parts of the ring obsolete and we have to be mindful of that and direct the action to the audience.”

Aries is in his second stint with TNA, having previously worked for the company for two years starting in 2005 when TNA was a three-year-old entity. TNA celebrated its 11-year anniversary in May, and Aries can tell there’s a noticeable change between his first and second time around.

“The company had some time to grow and expand in markets not only here in the states, but abroad as well,” Aries said.

“Personally, as a performer, I felt more polished and more confident in who I was as person and as a character and came back with the intention of putting my best foot forward,” Aries added.

“The challenge it presents for me is that you can’t rely on convenience. I spend time in the kitchen and I enjoy it,” Aries said. “I prepare for the week and bring food with me and some sort of plant-based protein and healthy snacks so I can control what I put in my body. Plus, I’m saving money on the road by not having to eat out every night.”

Outside of wrestling, Aries is a hulking football fan and, as a Wisconsin native, proudly cheers on the Green Bay Packers — “I’m a vegan cheesehead, go figure,” he quipped.

Aries, along with other TNA wrestlers, participates in fantasy football each year and they recently held their draft. Aries grabbed Doug Martin, Chris Johnson and Reggie Bush as his running backs, Jason Witten as his tight end and “rolled the dice” on Michael Vick as his quarterback.

Despite hailing from Wisconsin, Aries has some local ties to Maryland. He lived with his cousin Mike Solwold outside of Baltimore for a year while transitioning to wrestling on the east coast. Solwold was a long snapper for the Baltimore Ravens in 2003-2004.

“I was living with (Solwold) in Owings Mills and would actually help him snap on the field every couple days to stay sharp in case he ever got that call,” said Aries.

When he steps into the ring tonight against Magnus, it’ll be a nice dichotomy with Aries being the seasoned veteran against the up-and-coming Magnus. Aries has been in the ring with some of the top performers in all of professional wrestling today and likes to consider himself the measuring stick.

“A lot of people are saying (Magnus) has a great future and a lot of the tools, but we’ll find out if he has the intangibles. I think it’s going to be a good, exciting match and hopefully we’ll bring the best out of each other,” Aries said. “I think it will be a great match with Austin Aries’ hand being raised at the end of it.”