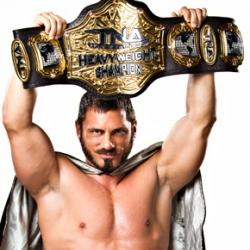 TNA World Heavyweight Champion Austin Aries was one of the featured guests on this week’s edition of the award-winning Monday Night Mayhem.

Austin joined The Big Mosh and “The Chairman of the Board” Todd Vincent for a Monday Night Mayhem worldwide exclusive interview, which is now available for download on the WrestleView Radio Network:

Why he credits simply being himself as the primary reason for his success over the past year since returning to TNA:  “I’m just a big believer in ‘timing is everything.’ In every situation in life, you should try and learn from it, and continue to grow. Coming back into TNA, I was more prepared, and I think they were a little more prepared for me. I have been given some opportunities, and put in a position, and I have been capable enough to capitalize on them. When I came into TNA the second time, I was very comfortable in who I was, not that I had a ‘take it or leave it’ approach. I was going to go in there, and be myself, and trust in that, and let the chips fall where they may. I’m enjoying my second time in TNA. Obviously I’m having a lot of success, and I’m about to main event the biggest Pay-Per-View of the year with Jeff Hardy, everybody’s ‘golden boy’…and I look forward to it.”

The evolution of the X-Division since he relinquished the TNA X-Division Championship earlier this summer and what he sees for the future of the division:  “You take someone like myself out of the X-Division, and that was a big hole that had to be filled. You see Zema Ion stepped up, and Sonjay Dutt, who has had some issues with his shoulder, but has come back from that. You saw Kenny King make his debut, and I think we will be seeing him again. There’s an influx. There are guys coming in and making some impressions. We will see what happens there.”

What it means to him in having the confidence of TNA as its World Heavyweight Champion leading into Bound For Glory and why he “wants to spoil everybody’s party” in his World Title Match vs. Jeff Hardy:  “I have to be real honest. It was great to have that boost of confidence and have the company behind me leading up to winning the championship. That’s really only half the battle. Once you have it, it’s what you can do with it. I’ll be honest. I see a lot of that momentum and support shifting to Jeff Hardy. That doesn’t necessarily bother me, because I’ve always operated best when it’s ‘me against the world,’ and coming into Bound for Glory, that’s how I’m approaching it. I kind of want to spoil everybody’s party, retain my championship, and then talk about my momentum and moving forward. This is my first real challenger after moving past Bobby Roode, so I need to cement this before we start talking about having momentum and how I feel.”

The final message that he wants to personally send to “The Charismatic Enigma” leading into TNA’s biggest Pay-Per-View of the year and what he feels he has to prove to himself in their match this Sunday night:  “I think the one message I have been trying to send to Jeff is that I’m still hungry. I’m not sure that he has that same hunger, because he has accomplished a lot of things that can make a man complacent and not as hungry as he used to be. I know Jeff behind the scenes. I know his priority list. I’m not going to sit here and tell anyone that wrestling is number one on that priority list, when you factor in everything else, like his artistic ventures and his family. I don’t have those things. I haven’t yet achieved the same level of success that Jeff has. I don’t feel like I have 100% of the support behind the scenes that a person of Jeff Hardy has, and I will have to prove myself to get it.”

Much more is contained in Austin’s exclusive interview with Monday Night Mayhem, including his candid thoughts on if he expects to see any interference from Aces & 8s during his TNA World Title Match vs. Jeff Hardy, why he’s looking forward to the Bound For Glory weekend in Phoenix, Sting being inducted into the TNA Hall of Fame, going up against his favorite NFL team (the Green Bay Packers) on Sunday night for Twitter supremacy, whom he would like to square off with after Bound For Glory if he is successful in defending his gold, CM Punk & Daniel Bryan becoming main event talents, plus so much more! Follow “The Greatest Man That Ever Lived” right now on Twitter (at www.Twitter.com/AustinAries), and be sure to call your local cable or satellite provider to place your order for TNA’s Bound For Glory (airing this Sunday night, October 14th, only on Pay-Per-View).

Celebrate the ten-year anniversary of Monday Night Mayhem by listening to exclusive interviews from TNA stars “The Charismatic Enigma” Jeff Hardy, Chavo Guerrero, Jr., and Hernandez, along with the first post-TNA interviews of Devon and Angelina Love, with many more of your your favorite Mayhem memories and moments coming soon! More details will be headed your way throughout the fall! Don’t miss all-new episodes of Monday Night Mayhem, available every Monday evening along the airwaves of the WrestleView Radio Network.