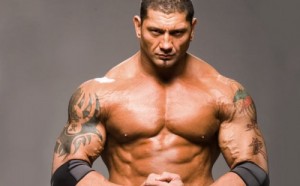 During the course of the interview, Batista was asking about a possible return to WWE. He commented that “of course” he’d like to return down the line and noted that he left on good terms and the door is open for him to come back. Batista said that he’d like to go back and do something before it’s done and quipped, “Let’s hope the whole PG thing blows over so I can go back and do wrestling the way I like to do wrestling.”

When asked who he would want to work with, he noted that he’s never had the chance to do anything with Brock Lesnar and that’s a program he’d like to do.

When asked about the idea of fighting Lesnar in a MMA fight, Batista said if that was offered to him, he’d take it if the deal was right but obviously, would prefer to face him in a pro wrestling setting.

This thread is located at http://forums.onlineworldofwrestling.com/showthread.php/19999-Batista-Wants-Match-with-Lesnar-in-WWE-or-MMA