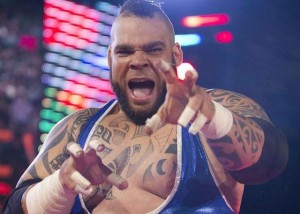 The Connecticut Weekender recently interviewed Brodus Clay. Brodus explains the transition from his “Fall of Humanity” character to the Funkasaurus:

CTW: So you fast forward a few months, and we have a highly anticipated re-debut of Brodus Clay. We saw these promos for months of a mean monster type guy coming. Then comes the time for the debut, and out comes “The Funkasaurus. Take us through from your point of view, how that came about , and what the reaction was.

Brodus: Ok so the weeks leading up, i swear i was about to lose my mind, what little hair i had on the top of my head i was pulling out. Literally every week I was getting ready to debut, ready to debut , but then week after week something would happen to delay it. I was turning into a laughing stock. I was getting text messages from home, saying what is going on. Finally the day comes and they show the sign with the disco ball and my name, and I get a text from my brother saying “Why is there a disco ball on your name?” So when I did come out it was dead silent, I could have said my name and it would have echoed through the building. There was a guy who was fired up and was dressed in my old ring gear, with his hair spiked up and a cut off shirt , and his mouth was so wide open, he was so upset. During the match he yelled at me “you suck Brodus Clay” and I yelled back “My Bad” and it kind of just went from there and I kept that as my catchphrase. It’s so hard to surprise people these days with the internet, but it shocked people.

CTW: I think even the announcers were surprised, everyone was expecting this monster Brodus CLay, one of the most aggressive guys in the business, and all of a sudden here is this guy rocking a fedorah and breakway pants. It caught us off guard for sure.

Brodus: I remember Triple H came up to me and said “whatever you do, do not look at the internet , it’s probably going to be bad.”

CTW: How bitter was it to finish second place to Johnny Curtis?

Brodus: You know what, Johnny Curtis, I came up with him, I trained with him. At the time I was genuinely shocked. They talk about that promo i did when i was eliminated, (see below) and that was 100% how I felt, it was legitimate. If you watch American Idol, or X Factor, you see the guys that come so close to winning but then don’t. I understood how they felt. It was definitely bittersweet, but they wouldn’t have gotten that reaction out of me, and I probably wouldn’t have gotten paired up with Alberto Del Rio had I won

This thread is located at http://forums.onlineworldofwrestling.com/showthread.php/20052-Brodus-explains-the-transition-from-his-Fall-of-Humanity-character-to-the-Funkasaurus