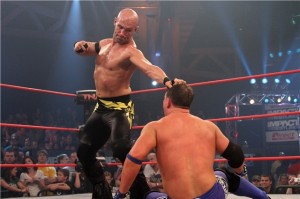 Whether it’s larger than life characters, the eternal battle of good vs. evil or tight fighting lycra outfits, the world of comics and professional wrestling have a lot in common. We’ve previously spoken to artist Jill Thompson about her work with wrestlers like Daniel Bryan and Chris Jericho, but what about the wrestlers themselves? With many wrestlers waxing lyrical about their love of all things comics-related on Twitter and social media, we caught up with one of the most passionate – Impact Wrestling’s Christopher Daniels. This stalwart of independent wrestling in the US and current star of  Impact Wrestling on Spike TV, we asked the man known as the ‘Fallen Angel’ just why there is so much in common between the two worlds and whether we could ever see his alter ego grace the printed page.

Which came first, your love of comics or a love of wrestling and which characters were your favorite growing up?
CD: I honestly don’t know which came first; I’ve been a fan of both for as long as I remember. I grew up in North Carolina, which was home to the Mid-Atlantic territory, so I got to see Ric Flair, Dusty Rhodes, the Road Warriors, and Magnum TA. At the same time, I was reading X-Men and Teen Titans, Hulk and Fantastic Four. My first memories of actually following a series and a character were of Claremont & Byrne’s amazing X-Men run, and Wolverine was definitely my favorite.

There are a lot of similarities between wrestling and comics, and wrestlers and comics fans, why do you think that is?
CD: I think that both offer the type of escapism that people are looking for in their entertainment, the type where good eventually triumphs over evil, where everything turns out good in the end. And while, the journey to that climax is happening, mood twists and turns keep an audience wanting more.

You’re often on the road; do you take advantage of digital comics on an iPad or other tablet as a way to get your fix of comic book action?
CD: Definitely. I don’t think I’ll ever get completely away from buying the actual physical comic book, because I’m also a collector, but I’ve been buying books with the codes included, so I’ve been able to read my books on the road without having to carry them around and risk damaging them. Also, I’ve found that I’m more inclined to give a new comic a chance and buy it directly for my iPad, where in the past I might not have bought the physical copy of something I was on the fence about.

If you are an iPad or tablet comic fan, what do you think of it as a way to read books and what are your current must-reads?
CD: I’m very new to owning an iPad, but I’ve been very happy with my experience so far. The first big series that I got into once I got my pad was Avengers vs. X-Men, and some of the cool perks of reading it on the iPad were the Infinite stories that were included in some of the issues, which were basically a hybrid of animation and original comic art.

The Fallen Angel seems like a very comic book inspired persona, would you consider developing a Fallen Angel comic if given the chance?
CD: The character wasn’t inspired by a comic, but I have had a story in the back of my mind involving me and the Fallen Angel persona, and now that I’ve made such close friends at Marvel, I may slide that idea their way and see if I can finally create a comic story of my own!

Which wrestlers in TNA, WWE or even ROH would make the best comic characters and why?
CD: Well we’re all just comic book characters come to life anyway but for the sake of this particular question I’ll go with the most colorful and charismatic of characters: Rey Mysterio, Brodus Clay, Sin Cara, Kane,  AJ Styles, Samoa Joe, Curry Man and El Generico. And yours truly, of course!