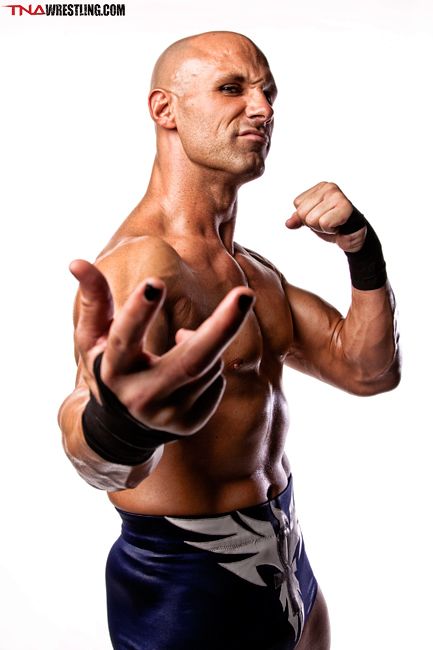 Editor’s note: the following interview with Christopher Daniels appeared in The Moaning News:

When did you first decide that a career in Wrestling was for you and if you had not gone into it what would you be doing?

Well I actually got into training in 1993 I was an actor before that doing children’s theatre and stuff like that and in between gig I decided to give professional wrestling a try just to say, I wanted to go through the school I found out about a school and just wanted to give it a try, and If I washed out and I failed I could say to my kids hey I give it a try. Because I grew up watching it I trained for three months and learned it all pretty quick how to do stuff and started wrestling three months later and I just kept with it and stuck with it and eventually I was popular enough where I would work all the time. All of a sudden I was working every weekend and doing tours in Japan and it sort of became my career not accidently but it snuck up on me. I decided after I was doing it full time that I was doing it full time. As far as what I would do if I wasn’t doing this. Probably still trying to do acting and some sort of theatre.

What has been the best show, best match and moment in your wrestling career and why?

I think the best moment and best match for me was the three way with AJ Styles and Samoa Joe just because I think the audience the crowd and the fan base were ready to have three home grown talents in their main event and it was the first time the x division title, that the three of us valued very highly had been in a main event ahead of the world title. It meant a lot to all three of us and the crowd responded. Three home grown wrestlers, it was just the case of having the right audience and the right match and that made history.

When the idea of Curry Man was put to you what did you think and what have been your best and worst characters you have played?

When it was first given to me I wasn’t sure what to make of it I didn’t know the character that it was based on. For the first couple of months I wasn’t quite sure how they wanted me to do it, realising they just wanted me to do what I wanted to do, that’s where the wearing funny hats came from and have fun with rather than having some pre conceived notion of what to do with it. Once I went to TNA with it, it was another company where I just let myself go and have fun with it and to not take things too seriously and not think too seriously about my matches at that time.

I have a very positive outlook to the crew we have around now in terms of the creative team. They are very open to suggestions and are open to letting us as the characters do what we feel is right and are very open to suggestions .Eric Bishoff ,Jason Kuribi Matt Conway and Dave Labatta all that crew are supportive in letting us build the character in what we think they should be doing and you know we always bounce ideas off each other and the sort of the best idea rules. It’s probably some of the best, creatively some of the best supportive stuff I have been a part of in a long time in TNA and it’s a great group we are dealing with.

In most of my spare time I mean I have two young kids so I am normally mom when I am at home, my wife works and I take care of my family and the house. I am also a comic book reader I still collect comics, 30 years I have been doing that. That’s really how I spend my time looking after my house and taking care of my body and reading comic books. I do normal stuff I’m a movie guy .Me and my wife are big movie buffs and we try to catch movies as often as we can. I read occasional stuff that isn’t comic books Stephen King etc I will read that and that is basically it. The things that annoy me are closed minded stupid people but they are everywhere.

Can you tell me a story from when you have been on the road and who are your friends in the industry?

With injures and bumps you take what makes you want to wrestle and what is the worst injury you ever had?

Well as far as what made we want to wrestle .You don’t really conceive of the injury and wear and tear your body goes through until deep into your career. I was training and learning all this stuff and seeming like I had an endless amount of energy and an endless amount of bumps ahead. Now 20 years down the line the injuries are starting to catch up to me a little bit but it’s still fun and still what I want to do so that sorts of off sets the pain you go through. The worst injury, I have been fortunate that I have only had a few that kept me out for a long period of time. I landed on my head once and lost the feeling in my arm for about six weeks and that still sort of bothers me. There’s still some residual damage from that injury. But overall I have been very fortunate and very smart. I wouldn’t call myself a risk taker. I don’t do things I don’t think I can do. I don’t attempt stuff in the heat of a moment or twenty minutes into a match and I feel like that over the past 10 years at least I have been much smarter about the risks I will take in a wrestling ring.

You have been a good tag champ and singles champion but which do you prefer and why?

I honestly don’t prefer either one. I have had great success with both and I enjoy both. When you are wrestling out by yourself all success and failure comes from yourself .I love fighting with someone I have great chemistry with like Frankie Kasarian and going out and sharing that experience and getting fans into what we are we are doing. I just gravitate to one or the other and stick with that for a period of time.

Can you tell me one thing about yourself that people might not already know?

What are you up to at the moment and what’s next for you?

Well you know with what’s up at the moment I am still teaming with Frankie Kasarian and being the best tag team in the business. Now that TNA is on the road March 14th with our Impact show. We are going to be travelling around the United States probably around the world doing our television show. I am looking forward to wrestling in front of new fans and doing some good shows the next couple of month and from then the skies the limit for us we are looking to being Tag Teams Champion one more time and when that opportunity comes I’m sure that will happen and there the world heavyweight championship in mine and Frankie’s future I’m sure. It’s just a matter of time and opportunity. Those are our goals and that’s what we want to do and we will travel the journey towards those goals.

Check out the interview here: