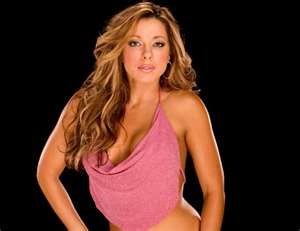 David Dexter reports that WrestlingINC.com recently interviewed former ECW and WWE superstar Dawn Marie Psaltis. During the interview, Dawn discussed starting the Wrestler’s Rescue charity, recent accusations from Kamala and The Blue Meanie, past controversies, the business today, if wrestlers are better taken care of now than in the past and more. Here are some highlights:

WrestlingINC: When you first started Wrestlers Rescue, where did the idea come from?

Dawn: I left wrestling in 2005 to have my children and my son. I was away from it for about two years. Then, what happened was I started to go back into it, started to do autograph signings. I guess from stepping away from it and going back, it made me realize things that needed to change, things that were going on.

So, I was at a show in Chicago and I saw The Iron Sheik and he was just in really bad shape. I just saw that and it just made me sad that he was living his life in a wheel chair due to needing a double knee replacement. There’s no reason for that. In any other business, if you needed a double knee replacement due to your career choice, it would be covered in some way.

Asbestos. I like to use that for an example. Once they realized what happened and people were breathing in harmful air and giving them lung cancer, there was a class-action suit and they were taken care of.

Same thing with the ring. The ring was really stiff back then, it barely gave. So, there’s a lot of knee replacements and hip replacements. Things like that. Nobody takes care of them. They were left on their own to take care of it and that’s a very expensive bill to take care of. So, I just saw the need and started the foundation and thought that this would be a really great way to stay within the business and change it in a positive way at the same time.

WrestlingINC: When you did start the charity, how was it going initially?

Up until the Steve Williams campaign, and [we] raised a lot of money for him. Unfortunately, he passed before the campaign was over. Then, we had the rumors around about that. People used Steve’s campaign to tried to sabotage us. There was a gentleman named Michael Porter who wanted $500 for rent and we don’t give out money for rent. They didn’t understand that. He said to me, ‘If I don’t do that, I’d be sorry.’ Well, they made me sorry. Because I didn’t give him the $500 towards his rent, he made up all these lies about the Steve Williams campaign, saying I never paid him and that I was investigated by the IRS and the FBI. I mean, crazy, crazy stuff. The fact that he was saying I was being investigated by the IRS is insane because we weren’t even open a year yet. I didn’t even have to file taxes yet. [Laughs.] The FBI? Come on. The FBI has a lot of better things to do than investigate me.

People want to believe what they want to believe. There’s a really big smear campaign. I did the same thing I’m doing with the Kamala issue. I put all the proof up. I did pay Steve Williams, I have the check on the website. All the other allegations that they said about me, I just proved them all wrong. That’s the best I can do. I can’t make people think something other than what they think they know.

WrestlingINC: With Steve Williams, what happened to the money that you raised? Did you end up donating it or did you put it towards the charity?

Dawn: No, I gave it to ‘Doc’. … If you go on our website and if you go to one of the top buttons that says ‘Financial’, you’ll see the actual check with his signature on it where he signed it off. ‘Dr. Death’ Steve Williams did not attack us. No, no. Michael Porter’s people, who I didn’t give pay for rent, wanted to try to get rent money out of me. They told me I would be sorry if I didn’t give them the money. What they did was created all these lies around ‘Dr. Death’s’ campaign. ‘Dr. Death.’ at that time was passed on, so he couldn’t defend me. So, they used something like that, which is very sad and disgusting in my eyes. Using someone that’s passed to get your way.

WrestlingINC: Since then, Brian Heffron (a.k.a The Blue Meanie) has said that Jerry Lynn never received money for back surgery.

Dawn: What happened with Jerry Lynn was we were coming off the smear campaign with Michael Porter and ‘Dr. Death’. Jerry had called me in the summer and I told him, ‘Jerry, I don’t know if we’re going to be able to do anything because we just had a really horrible smear campaign lead against us. But, let me see what I can do to help you.’

Meanwhile, I wanted to do a campaign for Jerry and I did one autograph signing. In that autograph signing, I went around and collected autographs because I wanted to do something for Jerry. I collected two or three autographs from everybody that was there. There was maybe ten people there. I got a doll from Axel Rod, an action figure. There was nothing of significant value that was collected and that’s what Brian is talking about. He gave me two or three pictures towards Jerry Lynn and I never did a campaign and he’s mad that I never did a campaign.

Then, I took his two or three pictures and I recently told him, over Twitter, I said, ‘Brian, if you have a problem with me, we’ve known each other for years and years and years. Be man enough and call me and talk to me about this. Don’t just go smearing me all over the place. Maybe it’s just misinformation. Maybe you donated me the two or three pictures, but, really, what are our pictures even worth anymore? We’ve all been off TV for so long. $5, maybe, maybe $10. Maybe. [Laughs.] Including myself, I’m not putting him down. I’m including myself with me being off TV for so long. Really, what are they even worth. If you want, I’ll send you your $30 if it makes you feel better. We didn’t even sell the pictures yet, we still have them.

WrestlingINC: Did he respond to you?

Dawn: He said, ‘I needed to give the money to Jerry.’ So, I said, ‘Fine, I’ll mail Jerry Lynn a check for $30.’ I mean, even Jerry Lynn went public and said I was the one that helped him get money from the Cauliflower Alley Club. That he was thankful for the help that I did give him. That he knew I was not able to do a campaign for him.

Karl Lauer even went public and he tweeted that had it not been for me, Jerry Lynn, “Dr. Death’ and Kamala all wouldn’t have gotten money. I was the one that made them aware of what was going on. Karl Lauer is the president of the Cauliflower Alley Club.

WrestlingINC: What do you think of the business today? Has it been making the appropriate steps to helping the guys out later, when their careers are over?

They’re always thinking that you should have done more, you have more and you should give more or whatever. I can only give what I have. Let’s say for example, Vince [McMahon] sends Kamala $5,000. So, let’s just say they send him $5,000. People would say, ‘You’re a multi-billionaire; you only going to send $5,000?’

So, unless Vince sends out money to make everyone financially independent, it’s never going to be enough. He can’t do that with everyone that’s walked through his doors.

WrestlingINC: So, with the stories you’ve seen, what advice can you give to younger wrestlers about how they can better adapt to a life away from the ring when the time comes?

Dawn: We were actually in the middle of working on an educational program. What the program was — let’s say, I’ll use someone as an example, Billy Gunn who has been off TV for a while. Or, let’s use Jerry Lynn, for example. He just announced his retirement because his back is in really bad shape. He says, ‘Dawn, I gotta retire. I need to get my act together and not make money wrestling anymore.’

So, I would find a school for him in an hour radius of his home, like a trade school. I’d ask him what he wants to do. He could say, ‘I want to be an electrician or whatever. Then, I’d find a school within an hour radius of his home that would be willing to donate a fee. Because we’re 501(c)3. So, they could donate the fee in exchange for the press and exchange for a write-off. He would be responsible for his books or anything like that because accountability is important also.

After his two-year program, we’d have a whole program put in place to help him build a resume, look for jobs. he’s have to report in that he went out on interviews. If he didn’t get the job, he’d have to call in and find out what he’s doing wrong to help him with his next interviews. That’s what our program was.

WrestlingINC: Absolutely. I think a lot of wrestling fans go to a lot of these conventions and see a lot of their old favorites broken down and not making anything. I definitely think your charity is a step in the right direction to help those guys out.

Dawn: I really want to keep it open and just work on the programs that I have. We’ll see. I just started a new job, it depends on how much time my new job is going to take from me. There’s a lot of factors at this point. Being a newly-single mom, it’s a lot more burden is on my shoulders. For me to even say it’s worth my time, then being beaten up so bad.

WrestlingINC: Absolutely. To kind of switch topics; are you still following wrestling?

Dawn: No. I started to a couple of weeks ago. I tape it, I have all good intentions of watching it and I tape it. [Laughs.] But, I never do. I’m always stuck watching cartoons with my kids because they kind of dictate the television selections.

WrestlingINC: How do you think it’s different than from when you were there?

Dawn: Back when we were there, wrestling was the primary, most important thing that we had to do. When had to show up early to the building to train for an hour or two and then we’d work. I don’t mean that they would show us what we were doing, we would train. We would train and learn to become better athletes and better workers. I don’t know if they’re doing that still, but the matches don’t look like they are.

Back in my day, you were in the business five or six years before Vince even knew your name. now, they’re just hiring models and teaching them how to wrestle,. So, it’s a different mentality. When you’re doing it for five, six or seven years and it’s in your heart. This is what you want to do and this is where you want to be and you’re grateful. It’s a different mentality walking in to that ring than someone who just got a gig. To these models, this is like a gig.