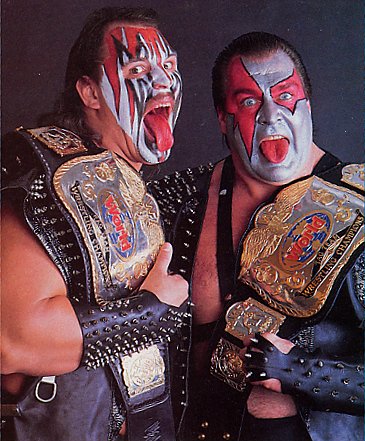 Former WWF Tag Team Champions Ax (Bill Eadie) and Smash (Barry Darsow), better known as Demolition joined Kayfabe Wrestling Radio Tuesday Night. In a nearly 30 minute interview, they discussed how the two were paired up as Demolition, making the switch of managers from Johnny Valiant to Mr. Fuji, if the face paint was cumbersome at all, being cohesive as a tag team and the tag teams of today, main-eventing events at Madison Square Garden and singles matches vs tag matches, the lengthy tag title run, who they enjoyed facing most, what it’s like working WrestleMania and if it was ever just another show for them, the old style travels chedule for wrestlers and much more.

Did the Two of Them Meet Prior to Being In WWE:

Ax: “Yeah, of course we’d heard of each other and we respected each other’s work, that’s how come we got together. We had the opportunity to form a tag team and I just basically jumped at the chance. I went up to Charlotte, had a nice lunch, went over a couple of things and from then on the rest is history.”

Smash: “Yeah, when I was down with Crockett, I got the phone call from Vince McMahon and he asked me if I wanted to be partners with Bill Eadie and of course I jumped at the chance, because ‘The Masked Superstar’ that was like the biggest thing in professional wrestling at the time and if I could get together with him, that going to help my career and teach me a lot about wrestling and that’s what happened. So, it was a great move for me, to partner up with Ax and become Demolition.”

Why Smash Was Added to Demolition After Randy Colley Left:

Ax: “Well, Randy was a friend of our and still is. Randy was identifiable because he had been there with the Moondogs; one of their Tag Team Champions and I think that;, at least I thought at the time, you have to have a new identity. Of course they didn’t have a reference for me because I had the mask and Barry hadn’t been in (the WWF) at the time; I just didn’t feel it was going to be successful and at that point, I was welcome to go back to Japan and continue wrestling as the Masked Superstar. Vince had approached me and said ‘No, I think this is going to be a good character for you. I think you need to get a new partner.’ And that’s how we got to meeting, Barry and I, and right away I’d heard of his reputation; he’s a hard worker and honest guy, and it just took off. We had good chemistry from day one.”

Smash: “Yeah, what I think worked out good for me was being down in the South; everybody and the fans of the WWF at the time, really didn’t know who I was because Jim Crockett Promotions and the NWA, the fans for that organization, watched all the guys in the South, but they didn’t watch the WWF and the WWF fans didn’t watch people from the South. So, they really didn’t know me when I came in, so it worked out pretty good. So we were two new guys in the wrestling business for the fans.”

The Decision to Change Managers from Luscious Johnny V to Mr. Fuji:

Ax: “Yeah, that was our decision. We had nothing against Valiant, but Valiant has a comical side to him and with our characters we didn’t feel we needed any comedy. We just wanted to go out and kick people’s rear end and smash their teeth in, as Smash used to say, and kick their stinking door down and we didn’t need anything to sidetrack that. Fuji was a very vicious, hated professional and he was managing at that time, he was managing some top talent, some vicious talent and it just meshed with our character. Now, if we had been like the Valiants, or like the Bushwhackers, somebody of that type; good talent, but Valiant didn’t match our persona. ”

Smash: “I was kinda hard when we were doing our interviews and you’d be so serious about beating people up and everything and then, all of a sudden, there’d be a joke after it or something, you know? It was just kind of a buzzkill a little bit. But he was a great guy.”

Ax: “Like Smash said, Valiant was coming out of left field with comments about our interview and it would just simply sidetrack the whole interview. Fuji let us set the meter of the matches. He give us advice but wouldn’t interfere. He was there for technical help, he was there for advice, but he didn’t get involved too much in our interviews and neither Barry nor myself, you can tell from this interview, we don’t have any qualms about talking.”

How Long it Took To Be Cohesive As A Tag Team and Today’s Teams:

Smash: “It was pretty much of a natural click, I think, because we’d both been in the business for so long and we just kind of… neither of us wanted to be better than the other one; we just wanted to both be good. So, it just worked out great to where we both got to be really good partners.”

Ax: “I think the success of any team is actually the team. You’ve got situations now, and I constantly get asked by fans, ‘What is the major difference?’ The major difference that I see is you’ve got two people that are thrown together now to form a tag team because there’s nothing else for them to do or they can’t figure out what to do. Years ago, and you can testify because you mentioned all the names, tag teams drove the company; tag teams drove the business. And to be successful, you have to be reliant, dependable, honest with your partner and you have to be a team. You know, Smash and I spent more time together than we did with our families, so you have to like each other; you have to be consistent and honest and giving, congenial and that makes a team. We didn’t have to think about what we were going to do. We’d observe something in the match; I’d pick up a move that he would do or he’d pick up a move I’d do; we knew what we would do right after the other.”

Smash: “And the biggest thing, there was no egos there. Where nowadays, there are two guys in the ring and they’ve both got egos they want to make sure that they’re the best out of the two of them and so they’re fighting with each other; not real partners.”

If They Still Got Nervous Working WrestleMania:

Ax: “I think if you were a real professional, you had butterflies. We discussed it, we have butterflies against some of the smaller crowds, and they’re not because of fear. You know, if you don’t get nervous, and you don’t get a little antsy before your event, then it should be time for you to get out. The nervousness comes because you want to do the best performance and have your best match. And we used to step in the ring, it didn’t matter if there were 100,000 or 5,000 or 2,000; those people still paid their money, but the money was already spent there in the seats and we want to make sure we have our best match that night; the next night we want to have our best match and the next night we want to have out best match. I think Smash will say the same thing, the larger the crowd, the easier the reaction was; you know, the crowd worked for you, versus against you. So, they would be more receptive.”

Smash: “Yeah, exactly. Every time you go to the ring, you’ve got the nerves and everything and it made your perform a lot better. Of course, the fans don’t think you’re nervous, but you’re nervous because you want to perform the best and have the best match you ever can. So, like Bill was saying, you’re nervous the same in front of 500 people as you were 100,000 people.”

You can see Ax and Smash ‘Demolition’ at the Heroes and Legends of Wrestling event on March 23rd in Fort Wayne, IN; go to heroesandlegendswrestling.com/ for more information on the event and as well as roster of talent attending, ticket prices, and the latest news.