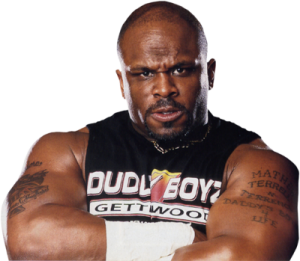 Former 23-time World Tag Team Champion Devon was the featured guest on this week’s edition of the award-winning Monday Night Mayhem. You can now feel The Mayhem every week only on the WrestleView Radio Network.

Devon joined The Big Mosh, “The Chairman of the Board” Todd Vincent, and MNM’s National WWE Correspondent Jim Molineaux for his first post-TNA interview, a Monday Night Mayhem worldwide exclusive interview, which is now available for download on the WrestleView Radio Network:

Setting the record straight on his official status with TNA iMPACT Wrestling and why his future in professional wrestling will be determined by faith: “The deal was up as of August 28th (of this year), and I was still (World) Television Champion. It just so happened at that particular point in time, we were in the process of cutting a new deal, but we couldn’t cut it in time before the deadline. A lot of fans speculated different things, and rumors were running rampant. Safe to say, I have no ill feelings towards TNA at all. It’s just that we could not come to an agreement before the 28th, and the deal ran out. It is what it is. Where I’m going to go and is where God wants me to go. If faith leads me to stay in TNA, I’ll stay in TNA. If faith leads me to go to WWE, then I will go to WWE. I will go where God puts me, and I’ll leave it in his hands.”

His first memories of his former tag team partner (Bully Ray/Brother Ray) meeting The Motor City Machine Guns (Chris Sabin and Alex Shelley) before starting their feud together and the importance of storytelling & thinking longevity in getting over in the business: “Bubba (Bully Ray) and I were getting that from The Motor City Machine Guns (Chris Sabin and Alex Shelley). I remember one of the first meetings between us a few years back, and I remembered them saying: ‘We didn’t kill ourselves. We had the people in the palm of our hands. It felt like we did nothing.’ That was one of the things Bubba and I tried to express to the younger guys. You don’t have to do a million and one things to get yourselves over. All you have to be able to do is tell the right story, and you’re be able to get over without killing yourself. You have to think longevity.”

His thoughts on those fans who still reminisce about Extreme Championship Wrestling today, more than a decade after the promotion folded: “When fans come up to me and express their love of what we did back then in the old ECW, we touched a lot of people. We set off a revolution and something that was never done before. You got a little indy promotion that came out of South Philadelphia, in a Bingo Hall that nobody thought would last a year, let alone two or three, and then it just became the third most popular company in the wrestling business at the time. To hear those three little letters, it meant something.”

Whether or not the thought has already crossed his mind about returning to the WWE: “I would be lying to you if I said going back to the WWE wasn’t a thought. It’s always a thought for anyone who’s ever been there and then left.”

Much more is contained in Devon’s exclusive interview with Monday Night Mayhem, including his candid thoughts on if the feeling has sunk in that he very well might not be working in the same company with Bully Ray (Bubba Ray) for the first time in years, the naysayers who believed that singles runs for him and his former tag team partner would not be possible in iMPACT Wrestling, what irks him about the fans who compare the singles runs of The Dudley Boyz in the WWE vs. TNA, being given the opportunity to perform as a singles competitor and the TNA World Television Champion, why he credits Hulk Hogan and Eric Bischoff for the recent success he had, what talents he enjoyed worked work with in iMPACT Wrestling (and those he would have liked to have work with), the origins of the HardCORE Justice Pay-Per-View in 2010 and whether there was actually talk of an “extreme” brand within TNA, why he hasn’t thought about retirement just yet, not “if but when” The Dudley Boyz are Hall of Fame bound, scripted vs. unscripted promos, plus much more!

Mayhem Nation: You can do your part and donate to Devon’s wonderful new charity, Hope for Single Moms. Send your check or money order to PO Box 561511 Rockledge, FL 32956. Follow Devon on Twitter (at www.Twitter.com/TestifyDevon) for more information. The new standard in professional wrestling schools is the Team 3-D Academy. If you think what it takes to become a professional wrestling, look no further than the Team 3-D Academy. Log on to www.Team3DAcademy.com for enrollment information, or e-mail their staff at [email protected]. Serious inquires only.

Celebrate the ten-year anniversary of Monday Night Mayhem by listening to exclusive interviews from WWE SmackDown General Manager Booker T, Jeff Hardy, and Angelina Love, with many more of your your favorite Mayhem memories and moments coming soon. More details will be headed your way throughout the fall! Don’t miss all-new episodes of Monday Night Mayhem, available every Monday evening along the airwaves of the WrestleView Radio Network.