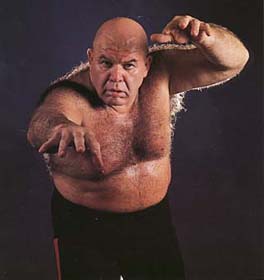 Wrestling great George “The Animal” Steele was bigger than life. He was wild, hairy, had a big green tongue, and would do crazy stunts like bite turnbuckles and spit the cotton into the crowd. He also had an ongoing feud with Bruno Sammartino and was famous for yelling “I’m not an animal, I’m a people!”

While crowds went crazy for this wild man of wrestling of the ’60?s and ’70?s golden age of WWE, behind the scenes, he was Jim Myers, a respected high school teacher and coach with a Master’s Degree. How he got into wrestling is the story behind his new book, “Animal.”

David Dexter reports that KDKA-AM’s Larry and John talked to Steele about his new book, and found out his wrestling origin started in Pittsburgh. Back then, he was trying to make extra money by wrestling while wearing a mask, when he was invited to Pittsburgh to fight Bruno Sammartino.

“I had my mask, and cap and gown and said I was going to be ‘The Student,’” says Steele. “They said no, we don’t want a masked man, we want you. I was a teacher and coach and didn’t want to use my real name, so we came up with a new name.”

That’s when another wrestling legend, “Jumping” Johnny DeFazio, suggested that since he was in the Steel City, he should call himself Jim Steele. Another person suggested George Steele, and a wrestling career was born.

“As a Steelers fan, I guess that’s a pretty cool thing,” Steele said.

Steele and Bruno Sammartino went on to have a legendary feud, wrestling each other on multiple occasions for years.

“We had some great runs together, and with Bruno and I, it was as tough as you could get in the ring,” says Steele. “It was the real deal. We’d beat up each other up– we always knew who was going to win, but we really went at it the hard way.”

As for his evolution into “The Animal,” it was all part of marketing to get his name out there. Back then, wrestlers didn’t have someone to promote them or come up with ideas, and Steele needed a shtick. This again had a Pittsburgh connection. Back then, when TV’s were still black and white, the studio would draw faces on plywood to make it look like there were bigger crowds. To bring people in, they would give out different promotional items.

“One day, they gave away satin pillows, and (local fan) Ringside Rosy had one. She got mad at me, and threw it at me. Now I have a pillow in the ring- if I throw it at her, I’m going to get hit with 300 other pillows, if I sit on it, it will be boring. What am I going to do?”

Steele choose to cut the pillow, but it was so packed with feathers, that the pillow exploded, sending feathers into the crowd, in the ring, and all over him. He then took the empty pillow case and put it over his opponent’s head. The crowd went crazy.

After the match, the other wrestlers thought it was great, and DeFazio commented that if only they could get him a pillow every match.

“Two weeks later, I’m wrestling Chief Jay Strongbrow, and the match just isn’t getting it done, so I looked over at the turnbuckle, go over to take a bit of it- it broke easily- and I started rubbing that in his face. All of a sudden we have a riot.”

“From then on, why wrestle- why not have a turnbuckle snack?”

When he moved on to wrestle in New York, everyone had a nickname. He was still just George Steele, and would be articulate in his interviews. It was his viciousness in the ring and his big hairy body that got fans calling him an animal.

“I grabbed the mic and I yelled ‘I’m not an animal, I’m a people!’ The more I did that, the more they called me ‘The Animal.’”

There are lots more wrestling anecdotes and tales of Steele’s career in his book ‘Animal,’ available now at most bookstores and online.