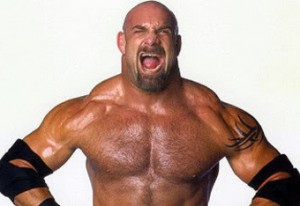 Goldberg was interviewed by 4th & Pain.  Here are some more highlights from the interview.

On The Streak’s Beginning: “I think between Tenay and Bobby Heenan, it was something they came up with. In all honesty, the character development, the crowd reaction, the squash matches, that all just came to be. I see what other companies are trying to do to emulate the streak and the reality is it’s hard to really duplicate something like that that actually came about by chance, by accident. It all kind of happened as it was going on. I don’t believe it was a preplanned being to give me an undefeated streak for a year or however long a period of time it was. It just gained momentum week after week after week and they just rode it out. I was lucky in the right place at the right time. Six or eight months after I got in the business I had the belt around my waist.”

On The Streak’s End: “I’m upset because they wouldn’t let Scott Hall hit me with the (Taser) with the barbs in it. Because that’s what I want. I figured if I’m going down, I want you to stick me for real. But, it is what it is. A few weeks after Kevin Nash was put on the booking committee, Kevin Nash gets to beat me first. But hey, it is what it is.”

Seriously? Real Barbs?!: “Absolutely! Adam (Carriker) can tell you… d-lineman are a different breed. I truly believe that even 20 years past me playing football, I have the same mentality as I did back then. I’m sure Adam has it. You have to. You gotta be a little nuts.

“The reality is, I wanted it as real as humanly possible. And if means me taking two barbs in my chest on national TV to make it look real, then damn! Let’s do it! I’m all for it.

“Right when they knocked on my door, I didn’t fake head butt every door and every locker in every training room that we were at. I went full bore. I was in it to win it, that’s for sure.”

“Dallas Page… the match Dallas and I had at Halloween Havoc one year and he wanted me to spear him like 15 times in the damn match. It turned out to be a pretty darned good match. I ended up knocking myself out when I ended up spearing him, but was able to finish the match.

This thread is located at http://forums.onlineworldofwrestling.com/showthread.php/19993-Goldberg-Talks-About-The-Streak-Favorite-Matches