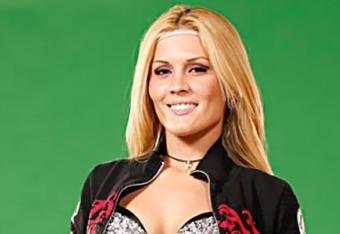 Listen to the latest edition of The Greg DeMarco Show, as special guest Ivelisse Velez joins Greg and Patrick O’Dowd to talk about WWE Tough Enough, wrestling in FCW/NXT, and her TNA Gut Check tryout! Also hear the lowdown on her career in Puerto Rico and her moniker “The Huntress.” All this, plus WWE Extreme Rules reaction, Chad Perry, Tony Acero and a huge announcement about the guest for our May 26 2-Year Anniversary Show!

Ivelisse was quick to address her release from the WWE:
“The release … the rumors, they’re just rumors … no matter what I say, I could say it 100 times: no I don’t have a bad attitude … I know for sure that since day one since I started my career I always seek to approach my work as professional as possible. I’ve heard it all. … People close to me, people that work with me can testify to that … my work is everything to me, it’s all I know. I gave up scholarships from school and I was an honor student and I gave up all of it to go on this voyage with complete odds against me … Of course I’m going to approach it with all my heart.”

She expanded upon her character traits:
“I am a very assertive person … in a man’s world they’re not very used to that. … A woman being assertive and not being walked over. … Maybe it came from that, I don’t know.”

On her portrayal on Tough Enough:
“It was a very hard experience in the sense that a lot of the things that were on TV or things that didn’t make TV that probably should have. … I’m very grateful that opportunity, but I feel, honestly, that it could have portrayed in a little bit more realistic way of how things really happened. … they never showed the diagnosis of my leg, then I ended up looking like a wimp. … Nobody ended up knowing the gravity of the injury to my leg. … I was going to continue … Doctor [had to tell me] that I can’t continue or they have to tear my leg off. … You tell them because I am not going to, because I’ll rip my leg off and then I can’t have a career.”

On her FCW/NXT experience:
“It’s really frustrating to hear that [that you’re ready to be on television] and then you don’t [get used on television]. … That was mostly the hardest part. … You feel so ready but it’s a whole different ballgame—it’s not just having the skills or the talent or the look. You can have I all but there’s so much more to it there. … We’re all human and sometimes people make mistakes, and people sometimes mix personal with business and you get the backlash of that. It took me a long time to register what happened. … It’s tough.”

On her TNA Gut Check tryout:
“Definitely it was a surprise to me as well. … In my head I thought there was no reason for me not to. I felt that Lei D’Tapa was great, too, and she has a lot of potential. At least I thought I was ready now. … They would have benefited from signing us both. … I’m happy for Lei D’Tapa, she’s a great girl, she’s humble. … I’m sure everyone felt like TNA could’ve benefited from both of us. … The whole thing, they were really good at that—at all moments, we never knew. … I had no clue what was going to happen at any moment. … Everyone knows both of these girls should be here. … That was my real reaction, I was just speechless. … When I heard that crowd…I feel like, equally, we both created that with our hard work into the match. … It wasn’t just her! … And then I didn’t even make it to the ring. … I was like “damn, really?” … From wrestlers and fans, it was a big reaction. A lot of people agreed that both of us had a lot to bring to the table. The only difference is I could bring it now. … I’m ready now.”

Ivelisse also talks about her return to TNA, going back home to Puerto Rico to win a championship for WWL, being a member of Shine Wrestling’s Valkyrie & her upcoming match for Shine Wrestling at Shine 10 and the origin of her “Huntress” persona.

Tune in Sunday, May 26 for the 2-Year Anniversary edition of The Greg DeMarco Show, featuring OVW talent and TNA Knockout Taeler Hendrix!