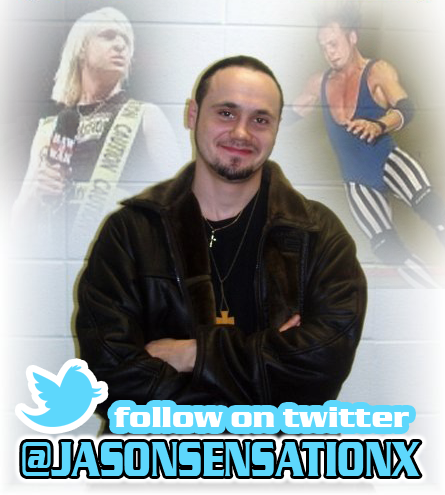 Jason Sensation joined Inside The Ropes this past week. Highlights from the interview are as follows:

On working with WWF after Montreal being close with The Harts:  “There was a couple of times I was doing some home shopping gigs in Canada with WWE and this was prior to my parody as Owen Hart and Triple H was at one of the shows and he came up and asked me to dress up like Bret and make fun of him. I really didn’t wanna do it, he was my favourite guy and everything. Triple H had to sit down and explain the business to me, telling me:

“You can be a fan, you’re not offending him, this is a job. You’re getting an opportunity, you can still impersonate him for us and it can be in dedication to him even though you’re making fun of him, it’s just part of the gimmick”

“When the time came, I just wanted to run for it and do what they wanted. I remember going and talking to Owen, the fan in me wanted to know, I tried to get him to open up, if he was happy or if he hated where he was. He said he was really content. He kinda gave me the OK that I could go for my dream there.”

The Owen parody:  “They wanted to sign me to a contract eventually so they brought me to shows, my first on the road job was to do Owen Hart. The way that Russo had wrote the promo was for me to be the stick man and do the impressions of each guy (Nation member) while each guy dressed up. It was really a last minute thing. Chyna didn’t want to dress up as Owen Hart. She was like “I really don’t want to, i think it’s really out of character for me, i think it’s better if I just stay myself” So they said “Fine, let’s just make Jason, Owen Hart and you guys just try to do the impressions yourself” so I was supposed to impersonate the whole Nation. It’s funny how it was all a big last minute change. It turned into something awesome.”

On Owen’s passing:  “He really made an impression on me. He was the one that helped me get in, and his impression is what helped me get over. I really looked up to him, he was like an angel to me. I was watching the PPV at home and it shook my whole world up. It was the saddest thing ever. The wrestling world lost a brother, it was so sad. It was one of the saddest times. I made sure I made sure I got to the funeral to pay my respects. I was really, really broken, I can’t imagine how his family felt, my heart still cries for them. It’s the greatest loss in wrestling to this day, he’s the greatest guy I ever knew in my life.”