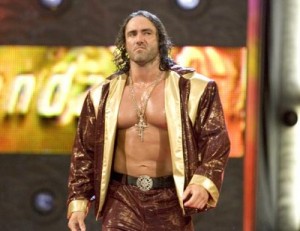 Former WWE/ECW/TNA/WCW Superstar and former NWA World Tag Team Champion, Johnny Swinger, was the featured guest on this past week’s edition of the award-winning Monday Night Mayhem. You can now feel The Mayhem every week only on the WrestleView Radio Network. Take part in #MNMX, the ten-year anniversary celebration of “Your Home of Wrestling Radio” right now on Facebook.

Johnny Swinger joined The Big Mosh and “The Chairman of the Board” Todd Vincent which is now available for FREE download, exclusively on the WrestleView Radio Network:

His memories of working with his long-time tag team partner Simon Diamond and how competing together turned into a lifelong friendship: “He’s the godfather of my son, and we were both the best man at each other’s weddings. We go beyond the wrestling business at this point. He’s doing the job he is supposed to be doing (in TNA/iMPACT Wrestling), and he loves it. I’m happy for him. I wish I could work with him again someday, because there isn’t anything more fun than working with your buddies. I miss our time together, because it was a lot of fun.”

Whether or not he’s considering a fun run with the WWE or TNA: “Another favorite saying is ‘Never Say Never,’ and I want to remind everybody again that I am 37, not 40, plus even though that doesn’t mean anything to me. Clint Eastwood in Grand Torino was a badass at 75. It is all about how you’re presented. I intend to keep doing this in the future. I worked in both of those places, and I would love to work there again.”

If it’s a worthwhile and productive idea idea to debut new Superstars at big Pay-Per-Views like we saw at the WWE Survivor Series with Seth Rollins, Dean Ambrose, & Roman Reigns: “They (the WWE) got the vehicle with their Pay-Per-Views, and their TV is still huge. I learned from Vince (McMahon) that perception is reality, and if you send a couple of these guys out on a big show, you’re telling these people that these guys are premiere talent. They are going to do something the night you initially watched them (on the Pay-Per-View), they are going to do something the next night (on RAW), and the next show thereafter. But what greater place to make an impact than on one of their major Pay-Per-Views, because they were presented like players.”

Much more is contained in Johnny Swinger’s exclusive interview with Monday Night Mayhem, including his candid thoughts on what he credits for ensuring a long career in the industry, the adjustments he made to keep himself safe inside and outside the ring, who he tried to emulate his style after, whether or not he has been contacted to appear on future ECW-themed events (Extreme Rising, House of Hardcore), how impressed he is at the drawing power of those promotion’s recent shows, why “ECW Originals” still compete today, Paul Heyman as a motivator and inspirational leader, the legacy of Extreme Championship Wrestling, the significance of the November to Remember Pay-Per-Views, what he feels the long-term plans might have been for an “extreme revival” in TNA after the initial HardCORE Justice PPV, the differences between the current independent scene vs. that of 20 years ago, plus so much more!