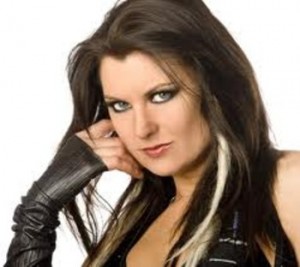 If her early background in drama and theater helped her developing a character for wrestling:  “Yeah, I would say it helped, especially the improvisational part helped, because there’s just so many times when you’re just thrown out there and given just a general note of what you’re supposed to be saying; you know, what your bullet points are and you’re supposed to create a whole conversation around it and make it interesting and varied and in turn with the character that you’re trying to portray. Especially the improvisation then helps; just that you have experience and that it’s not regular bunny-in-the-headlights ‘Oh God, what am I going to say next’, but that it’s something that you’re used to and feel more confident doing that. So, I’d say that especially helps. And then with the character building, I guess a lot of wresting is being able to portray a character that you sort of secretly want to be, a lot of the time; not always, obviously. But if you really get to pick and choose who you can be, you know, the evil “B” that you never get to be in real life; maybe you grew up being very nice and polite to everybody, at least you get to scream and shout and swear and be this horrible being. Yeah, it’s fun.”

On her days in OVW and learning the “WWE Style”:  “Al Snow was in charge of us (OVW Divas), and I think that Al Snow is one of the people I’ve learned more from than anybody else. He’s such a great teacher and really the WWE style made a lot of sense, especially the way he was able to explain it because it’s all about the story; storytelling in the ring and the dramatics andthe story between the two people that will keep you watching rather than just some moves, one next to the other. So, in that sense, I was really grateful to be able to learn that and understand that and I’m still grateful now when I go to do shows, that I have that knowledge, that I got in OVW; that I have that in the back of my mind that I can use. It was just a really great learning experience, especially because Al and Danny Davis were writing the TV show. So, you were able to go to Al with ideas for storylines and for your character and he would help you put together something that, if what you suggested didn’t work, he would explain why and what to change, but he would always take your ideas on board so that you could learn from your own creativity and be creative. It was a really awesome experience.”

Her character in WWE and the possible ‘incest’ angle with Paul Burchill:  “I thought it was going to be a wonderful idea. I mean, I knew it could eventually end up disastrous but it could also be amazing. I mean, who is not interested in that? Any time the mainland TV show has run some kind of incest angle, it’s been the most talked about thing. I don’t know if you guys do that over here; in England, we’ve had a few of those going on. I thought it was alright to refer to the film ‘The Crow’ where you have Top Dollar, the bad guy, and his sister or half-sister have some kind of thing going on there between them. I just figured it would be something like that where it’s kind of implied by not right there; maybe a tease and maybe it would come out a bit more or maybe it was just an unspoken kind of thing. But wither way, I really felt it was something intriguing and that people would be fascinated by and would want to watch. I was all for it.

What the Wrestlemania experience was like for her, for both events she was at:  “Well, the thing is for me, growing up Wrestlemania didn’t stand out amongst the other PPVs. To me, Royal Rumble, Survivor Series, Wrestlemania, King of the Ring; I really didn’t understand, really, the difference. Like I didn’t see Wrestlemania as being the uber-supershow, because I wasn’t that plugged into it; I was just watching on TV, you know, in Germany. So for me, any PPV they had then, not right now where they have one every month, but back then when it was the 4 or 5 big ones, that was (PPVs) a big deal, in general. In hindsight obviously it’s ‘Wow, I was at Wrestlemania” so that’s awesome. But Wrestlemania didn’t stand out for me as a bigger PPV that the others. But that being said, it’s still something I can say “I was at TWO Wrestlemanias”; that’s pretty savvy.”

Who truly came up with her Winter gimmick in TNA; herself or Vince Russo?:  “I think that’s a difficult question to answer because he basically came up with the thing, the story and that, and he would tell you pretty much what to say and then you also have to, as an actress or a performer, change around little pieces and you have to make your own, but I’d have to say Vince essentially came up with it and I changed it out; you know how you have those coloring books, Vince was the one who gave me the coloring book, and hopefully, maybe, I put the right colors into it.”