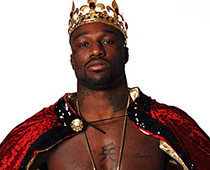 Where does he feel he is at with his wrestling training: “As far as where I’m at, I’m still a baby. Some people it takes years. Some people it takes a few months. I’m hoping it takes a few months, but I want to be on the level of Kurt Angle. If I could get to that level in a few years, I’ll be alright. I still have a long way to go. I’m willing to spend the time and dedication to get there.”

What his role will be as enforcer in the James Storm/Bobby Roode falls count anywhere match? “I guess I’m a referee and an enforcer. I figure if I’m the guest enforcer, I might as well be the referee as well.  I’m cool with anyplace besides the bathroom. I don’t want to be slapping one, two, three and there is piss on the floor. I don’t care if its dirty, I just don’t want any bodily fluids on the floor. If it’s blood, I’m ok with it. Any type of urine, I don’t want to deal with that.”

Will he fill the void of the lack of bad-asses in wrestling:  “Here is the thing. Most of the guys who played the badass role are terrible wrestlers. I’m not saying I’m better than them, but I’m hoping I’m the badass with also being a good worker. The Ultimate Warrior was a badass but he wasn’t any good. Goldberg they said was horrendous. I’ve seen guys like Nathan Jones who wasn’t any good. So guys who played that badass role tend to be terrible workers. I want to change that perception. If I’m going to be a badass in this business, I want to be known as a guy that worked well too.”

Talks about his debut on Impact Wrestling:  “Right now I’m nervous. My armpits are sweating. I’m nervous, but when I get out there I’m just going to be me. I’m going to let it come natural. I’m not going to try to force anything. I’m just going to be me. You see guys out there that play a role that’s just not them. The crowd is on to it and they don’t buy it. The people who play the role that is similar to them, a bigger version of them, then the crowd eats it up.”