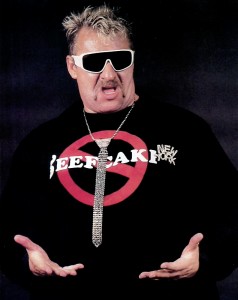 He’s managed WWE champions, worn WWE gold himself, and been inducted into the WWE Hall of Fame. But “Luscious” Johnny Valiant’s most interesting connection to wrestling dates back to well before he ever stepped into a ring.

In the early 1960s, Valiant, whose real name is Tom Sullivan, attended Fishburne Military School in Williamsburg, Va. There, he befriended a fellow cadet known on campus as “Flex.”

“He used to walk around, kind of posing and what not,” Valiant said of the future WWE chairman. “By way of the magazines, I was told his dad was a top wrestling promoter in Washington D.C… that he was this wrestling czar’s son. I said, ‘You’ve got to be kidding me.’ And he said, ‘Yeah, my dad is a big shot.’”

Valiant, who is coming to the Great Neck Arts Center on September 8, said the teenaged Mr. McMahon was quite the athlete playing basketball and competing on the school’s wrestling team. But, even then, the two future WWE greats liked a little showmanship with their sports. And so, after classes, McMahon and Valiant would often set up wrestling mats and put on a performance.

“He was ‘Ape Man’ McMahon and bleached his hair and we had matches in front of all the cadets,” Valiant said.

Valiant said McMahon’s penchant for toilet humor was apparent even a half-century ago. But the fun times they shared were mostly “above board.”

“He would say, ‘Come on, Tommy. Let’s go down and get a hamburger,” said Valiant, who remembered chowing down on burgers and apple pies with McMahon and talking sports. “He knew I was kind of a funny guy. . . You can’t dislike the guy.”

Then, one hot day late in Valiant’s junior year the two teens decided to skip out on a routine drill formation of the school’s cadets.
“I said, ‘I don’t want to.’ Let’s go hide.’ So we went up to a tower and watched the guys parade,” Valiant recalled. “We thought it was so funny. And, low and behold, somebody finked us out and they came up and got us.”

“I was court marshalled and kicked out of there,” Valiant recalled. But, because McMahon was “a big star on campus,” he was allowed to stay, Valiant said.

“The next time I saw him, my hair was bleached, I was at the Philadelphia Arena, and he had a microphone,” Valiant added.

Despite their past friendship, Valiant said McMahon had nothing to do with helping breaking him into the business. Instead, Valiant credits Bruno Sammartino with giving him his start.

Valiant said after military school he joined the Marines, and when he was 18, he went to the home of Sammartino, who lived near him in Pittsburgh, and knocked on his front door. He offered to run errands for him, like picking him up at the airport or walking his dog, in exchange for helping him get his foot in the door of the wrestling business.

“My life changed the time I knocked on his door,” Valiant said. “It’s like somebody who wants to get into baseball knocking on Pete Rose’s door.”

Valiant said when he was 18 he went to the home of Sammartino, who lived near him in Pittsburgh, and knocked on his front door. He offered to run errands for him, like picking him up at the airport or walking his dog, in exchange for helping him get his foot in the door of the wrestling business.

“My life changed the time I knocked on his door,” Valiant said. “It’s like somebody who wants to get into baseball knocking on Pete Rose’s door.”

Valiant went on to twice capture the World Wide Wrestling Federation Tag Team Championship with his “brothers” Jimmy and Jerry Valiant. After largely retiring from competition in the early 1980s, Valiant began a second career in wrestling as a manager, most notably for the “Dream Team” of Brutus Beefcake and Greg Valentine.

“When you’re a tag team champion, when you’re an active wrestler in the ring, you get hurt a lot and you have a lot of commitments to maintain nightly,” Valiant said. “So, by and large, I didn’t miss that at all.”

Valiant said he enjoyed managing Beefcake and Valentine, including during their memorable feud with The British Bulldogs, who he said would routinely send him over a bottle of wine when they’d see him in a bar.

When Beefcake left the team, Valiant briefly managed replacement member Dino Bravo, who he called a “jovial guy” who would laugh easily at his jokes.

But, unlike most heel WWF managers of the 80s, Valiant never had a large stable of charges. Valiant said that may have had something to do with his refusal to play politics.

“I think a lot of the other guys, to be quite honest, ingratiated themselves with the front office,” Valiant said. “I was never really there campaigning for myself to expand my guys.”

After a brief stint as a broadcaster, Valiant said it became apparent that he wasn’t long for the wrestling business.

“I think Johnny Valiant was a guy that had a past and a present, but he really didn’t have a future with the WWE,” said Valiant, who added that “you would think” his longtime association with McMahon would have kept him in the WWE fold for years.

“It’s not hard feelings. It’s disappointment . . . It’s like, wow, are you that ruthless? I should have been there as long as I wanted to be there. And yet, some guys stay there forever.”

After largely leaving the wrestling business in the late 1980s, Valiant looked to apply his creativity in various acting roles and in his standup comedy act.

Valiant, who will host the Gold Coast Acoustic Café’s Comedytogo event on Sept. 8, said it hasn’t been an easy transition. Even after more than 20 years, he said he’s still honing his standup act, which includes reflections on his life in and out of the ring, and comparing today’s wrestling to that from his day.

“Now it seems to be very synthetic. It’s just contrived and people can see that,” Valiant said. “You take this CM Punk. He’s one of their top guys . . . The guy looks very acceptable, very athletic. He’s got the tattoos. He can do all the moves, and he’s got everything going for him. But he talks like he should be doing your taxes.”

Valiant said lack of personality is a problem plaguing a lot of modern day wrestling villains.

“Where’s the heat? The heat comes from when sneak the steak from the diner,” Valiant said. “This guy [Punk] is leaving the tip. So where’s the heat?”

Valiant hoped to apply some of his wisdom from more than two decades in the sport when he was cast in the 2008 film, “The Wrestler.” He spent time with director Darren Aronofsky and shot several scenes with Mickey Rourke for the film. But Valiant was, once again, let down when his role was reduced to a quick glimpse of him falling asleep at a table during a sparsely-attended wrestling convention.
“Aronofsky told me, ‘Johnny, put your head down at the card table.’ I didn’t question it. I thought, ‘OK. Do whatever you want,’” Valiant said. “But I thought, ‘I never did that.’ I never fell asleep at an autograph table… If it’s dead, I leave.”

Depite his past disappointments with the wrestling business, Valiant suggested he’d be open to attending next’s year WWE Hall of Fame ceremony in Madison Square Garden, but only if WWE reached out to him. He’s not holding his breath, as the last time he heard from anyone in WWE is when Howard Finkel called him a few years back asking if he had any ring jackets that could be put on display when an actual WWE Hall of Fame building opened up.

For more information or to buy tickets to the Comedy To Go Event at the Great Neck Arts Center, hosted by Johnny Valiant, visit http://www.greatneckarts.org.