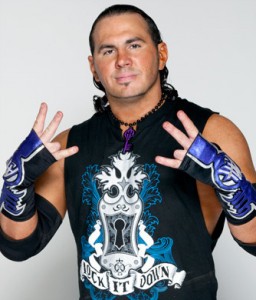 Hosts Jack E. Jones and One Inch Biceps welcomed Matt Hardy of Extreme Rising to IYH Wrestling Radio.  Matt was on the show to publicize the upcoming Extreme Rising show on Saturday, November 17 from the Golden Dome in Monaca, PA that will be on IPPV (http://www.WWNlive.com).  Matt will be wrestling “The Franchise” Shane Douglas in the main event that evening.

Highlights of this interview included the following:

When he wrestled in June for Extreme Rising for the first time, was he unsure how the fans would react to him?

“No, I was pretty sure and I think I pretty much had it to a T.  I’m pretty good at being on the pulse of how wrestling fans are going to be.  I knew it was going to be a very mixed bag, because wherever I go there’s going to be diehard Matt Hardy/Hardy Boyz fans, which are younger kids or people that followed us through our WWE career; they’re going to be there and they’re going to be supportive regardless of whatever.  But then the diehard ECW and extreme-niche fans, because I’m not an extreme original or an ECW original, I knew those people it was going to be an uphill battle.  And you know, it’s one of those things in time only you earn their respect, especially when you walk into their promotion and on your debut match you’re in the main event against Jerry Lynn, who is one of the ECW icons.  I knew it was going to be a mixed bag for sure.  The people that were diehard extreme wrestling fans, they gave me a hard time, which was great.  And my fans were there cheering, so it’s OK.  As long as I’m invoking emotion from people, it’s fine.  I’ll channel it in the appropriate way in the ring.  As long as they’re entertained and I’m invoking emotion, I’m good.”

Were there people that didn’t want some of the ECW guys to succeed when they would come over to the WWF?

“I think so…The thing that made ECW so good – Paul Heyman was such a genius booker/promoter because he highlighted everyone’s strengths.  I mean, he would take whatever the best qualities were about someone and he would keep pushing that, pushing that, and pushing that and get everything they could out of it, and that’s what gets characters over.  That’s what gets characters or wrestlers to connect with the crowd emotionally.  Public Enemy, they had their deal; they were hip-hop gangstas and they did the hand motion and they would put people through tables, and they ended up being a huge act.  When they came to the WWE and were forced to wrestle a couple matches; I know there were some guys who didn’t like them.  They ultimately had a match with the Acolytes which was very very ugly.  Taz was another guy who was over huge in ECW.  Once he came to WWE, you can see that never translated.  Once again, they took away from playing to his strengths and what his character was built around.  And the examples keep popping up over and over if you look at Paul Heyman’s ECW originally.  Sandman, he came out and he would drink beer and he would cane people, and he was over like crazy and people bought tickets to see him.  911 was another example of a guy who was very limited as far as being a complete wrestler overall but he became a huge star there; he was really over…At WWE sometimes they expect people to be a more well-rounded performer 360 degrees and be able to do everything, and my thought is if it’s business and you’re trying to make money you want your acts to be as over as they possibly can be.  And if that means like protecting them in some areas that they’re weak at, then why not do it because it’s your investment in the first place.  But that’s not always how the WWE crew thinks.”

Matt also discussed other topics, such as:

Does he think there is any particular reason Shane Douglas is coming back from semi-retirement to wrestle him?
If he and Jeff hadn’t gotten a shot with the WWE, would they have signed with ECW?
What does he mean when he says that professional wrestling is a “black sheep”?
What company caters more to the fans:  WWE or TNA?
Does he have more motivation right now to prove that he is still a great performer after some of the things that have happened the last couple of years?

The interview with Matt closed with another mention of the Extreme Rising show on November 17 (for information go to http://www.extremerising.com).  Matt also provided his website address (http://matthardybrand.com/) for anyone interested in contacting him and/or buying merchandise.

This interview is available for listening at http://www.iyhwrestling.com/viewnews.php?autoid=5144