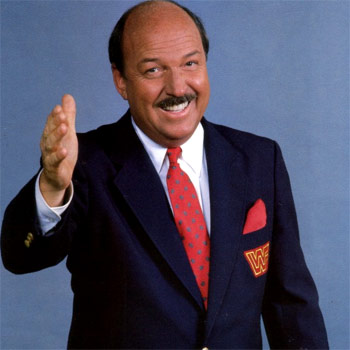 Legendary announcer “Mean” Gene Okerlund, who works for WWE on a limited capacity as the host of Vintage Collection and Classics On Demand programming, revealed in an interview with the St. Paul Pioneer Press, that he intends to work for the sports-entertainment organization for at least three more years.

“Brock probably is one of the top three stars in the organization,” Okerlund said. “We’ve got a pay-per-view coming up, ‘No Rules,’ which is right down his alley.”

It is also noted in the article that Okerlund resides in Sarasota, Florida and spends summers near McGregor, Minnesota, on Big Sandy Lake.

– Hardcore Holly is this week’s addition to WWE.com’s Alumni section. WWE says of the six-time Hardcore Champion and three-time World Tag Team Champion: “From the larger-than-life personas of the early ’90s to the wild brawls of The Attitude Era, Bob Holly’s long WWE career was emblematic of the eras of which it spanned. But after 15 years spent evolving on sports-entertainment’s grandest stage, there’s no doubt that Holly was one thing: Hardcore.”