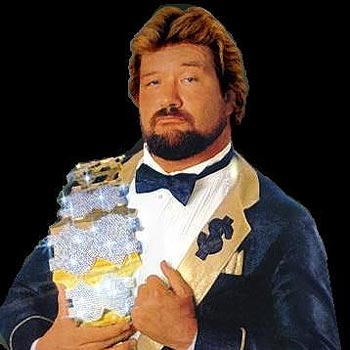 Wrestling as WWF World Champion at house shows after buying it from Andre The Giant: “I don’t know whether it was a week or two where I would go to a few house shows and they introduced me as the World Wrestling Federation Heavyweight Champion. Of course, that was to continue to let people’s anger stew, so to speak. How could this jerk do this? Then of course they come out with the statement from [storyline WWF President] Jack Tunney, the supposed boss, saying there was no way I could buy the title. They were stripping me of the title and since technically speaking, Andre had won, whether it was fair or not, that was the decision made that night. And since Andre was unwilling to take the belt back because I had paid him, what are they going to do? Well, the only thing they could do was hold a tournament to crown a new champion. So there was the setup.”

His “miserable” WCW run: “I went to WCW for three years and quite frankly, it was the most miserable three years of my life in terms of business, in terms of the most poorly run company I ever did business with, ever, in spite of the money.

“Basically, I think they tagged me as Billionaire Ted. I was supposed to be the mouthpiece and financial backer of the nWo but what really happened as this thing got hotter, Eric Bischoff saw where he could slip himself into the role that he hired me for. And that’s what he did. So, a couple weeks go by and I’m not having anything to say anymore, I’m just walking out there, standing in the corner with the rest of the gang. And I just went to Eric and I said look, I said I didn’t spend my career so I could end it being Hulk Hogan‘s belt wearer. I’m not Virgil. I said if you want to have my job, great. You hired me, so do it, I said. Bottom line is, you still have to pay me. So he agreed. I went home and they brought me back as a babyface manager to the Steiner brothers, which really didn’t make a whole lot of sense either.”

His son’s WWE run: “Ted Jr. [initially] went there and did very well. Shot out of the cannon , did a movie and did the whole thing with him and [Randy] Orton and Cody Rhodes. It’s kind of like everything seemed to go cold. That’s kind of a mystery. He’s also had a couple of injuries, but when you talked to the boys, when you talk to the guys producing the show, Arn Anderson and Michael Hayes and the guys that are helping the talent, they’ve all told me, ‘your kid is one of the best wrestlers we’ve got.’ Timing’s everything, I know that.

“They kind of went off in the wrong direction, in my opinion, when they tried to make him an extension of me. That whole bit where I gave him the belt and he kept saying, ‘I’m not my Dad,’ but that’s when he’s starting to act like me. It didn’t work… of course that’s not what he wanted to do. It’s really a mystery to me. People constantly come up to me, even now, and they go, ‘your son is so good, why aren’t they doing anything with him?’ I say, ‘you know, that’s a good question. I don’t really know.’ I’m not really sure where my son is too right now, in terms of, he had an injury and while he was injured he was off during the last couple months of his wife’s pregnancy and during the first couple months of his son’s life. I remember when he was getting ready to go back on the road he called me and he said, ‘Dad, I just want you to know, I get it now. Now I know why you didn’t want me to do this.’ He said it’s really hard to leave this little boy. I said, ‘well, I tried to tell ya, but some things you just have to learn that way.’

“Again, the business is just a business. There’s people that have labored and labored and it takes them a long time before they get that break and then they get it. Then sometimes, I’ve seen guys with a lot of talent never get it. It’s the nature of the beast.”

Dibiase also discussed hating working in WWE creative, working with Randy Savage and Andre The Giant, Honky Tonk Man indirectly nixing his WWF title win at WrestleMania IV and if there is heat over it, why he left WWF, his ministry, not wanting his children to join the business and much more. You can read the full Ted Dibiase interview at WrestlingINC.com by clicking here.