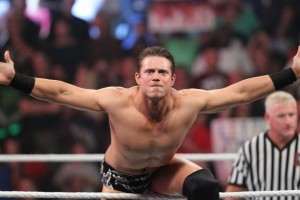 By Lana Sweeten-Shults, reporter for the Times Record News.

The he-man cometh, and he cometh in the form of World Wrestling Entertainment’s Intercontinental Champion Mike Gregory “The Miz” Mizanin.

Not that this particular he-man cometh from a long line of he-man stock.

Not that this particular he-man cometh from a long line of he-man stock.

The native of Parma, Ohio, began his formative he-man years as the captain of his basketball and cross country teams in high school, far from the sleeper holds, body slams and rope-hurtling shenanigans of the hulking, bulked-up Superstars and Divas of the WWE — Superstars and Divas, by the way, who will light up Kay Yeager Coliseum at 6 p.m. Sept. 30.

But he always loved wrestling.

“As a kid, I grew up loving the WWE. I was the biggest Ultimate Warrior fan … and if Hulk Hogan told me to eat my vitamins, I ate my vitamins. But those guys were larger than life,” said Mizanin with a laugh from Bridgeport, Conn., where the WWE RAW team was readying for a show.

One of his best childhood memories was going to a professional wrestling match with his father.

“It was in Cleveland, Ohio, at the Richfield Coliseum. It was the coolest, most fun I’ve ever had with my dad.”

That wrestling bug stayed with him while he followed more traditional pursuits. After high school, he went to Miami University in Ohio, where he studied business, though Economics 101 didn’t hold his attention for very long.

“I was at Miami University in Ohio, was in a fraternity there, and then I saw an opportunity to be on one of my favorite shows,” said Mizanin. That show happened to be MTV’s X-Gen fave, the “The Real World.” “I said, ‘You know what? I’m going to try out for this. I’m going to do it.”

He was cast on “The Real World: Back to New York,” which led to a slew of other reality TV opportunities, from “Real World/Road Rules Challenge” to “Battle of the Network Reality Stars,” “Fear Factor,” “Ghost Hunters” and even “Are You Smarter Than a Fifth Grader?”

But that wasn’t something he wanted to do forever.

And he’s not sure he would do a reality show again. It just depends on what it is. For now, he’s all about his life as a WWE Superstar.

It was while he was on reality TV that he created a character called The Miz, he said — a bigheaded, pompous alter ego that he would blame for certain misdeeds.

“When I was on ‘The Real World,’ I was ridiculed. Nobody liked me. I was the outcast.”

With The Miz, he said if he ever said anything wrong that got him into trouble with the other “Real World” housemates, “I just blamed it on The Miz and Mike didn’t get in trouble.”

After his stint on reality TV, Mizanin was looking for what would be the next big thing in his life. He had always wanted to try wrestling and so Googled professional wrestling schools. His trainers told him he wouldn’t get any special treatment just because he had already attained some celebrity status on reality TV.

“You’ll have to be like everyone else,” they told him.

“I tried really hard,” he said, and moved to places like Los Angeles, Atlanta and Louisville on his way up the wrestling ladder. “… It was brutal just having people tell you you’re not going to make it. But that was the fuel … One of the best pieces of advice I’ve ever gotten was from (wrestler) Billy Kidman, who said, ‘Stick with it.'”

When he finally made his debut in the WWE, it wasn’t as a Superstar.

“I debuted as the Ryan Seacrest of the WWE,” he said.

That was back in 2006, when he landed a job as the host of the WWE Diva Search contest, though he would get his shot just a few months later and made his official debut.

His first big accomplishment with the WWE came with John Morrison as a WWE Tag Team Champion, then after the team split up in 2009 and he was drafted by the Raw Brand, he won the U.S. Championship and tag team championships with The Big Show and also John Cena. He won the WWE Championship in 2010 after beating Randy Orton and held the title for 160 days, finally losing it to John Cena at Extreme Rules. His current title is the WWE’s Intercontinental Champion, which he earned after defeating Christian.

The “Miz” character isn’t the most humble of the WWE Superstars out there. Far from it.

“I tried to think, what would irritate people? Why not be the most arrogant, cocky person … so that’s where it’s derived from … But I back it up each and every time I’m in the ring. I get why people boo me.”

In the six years since making his debut, Mizanin said he sustained a concussion and didn’t remember any of the WrestleMania match he was in afterward.

“I’ve also broken my ankle. And we’re doing four to five live events each and every week.”

For the Sept. 30 show at Kay Yeager Coliseum, he said fans will see such Superstars as Randy Orton and, of course, his awesome self.

Still, despite the obvious challenges that come with such a physical sport as wrestling, Mizanin loves what he does.

Not only does he travel across the country as a WWE Superstar for shows from town to town, but he is the host of his own show on Sirius radio and he recently filmed a movie called “The Marine: Homefront,” in which he plays one of the good guys.

“I derived that character from a bunch of old movies … a lot of Paul Newman movies. I haven’t played a good guy in seven years.”

The journey to WWE has definitely been one that has been worth it.

“I’m enjoying my job,” he said. ” … Performing all over the world in front of thousands of people? I’m going to keep doing that.”