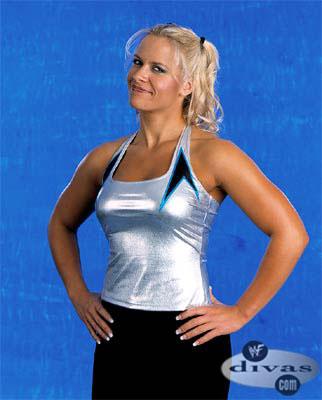 Whose idea was the Hair versus Title match at Wrestlemania XX where she ended up getting her head shaved?

“Well, I’m guessing that people listening to this wouldn’t be too hurt if I tell like the real, behind the scenes truth, but the real truth is that it was my idea.  I was told by the writing team that they were not going to have a Women’s Championship match at Wrestlemania, and I was really hurt by that…so I just came up with an idea that I thought they couldn’t say no to, and so I pitched it.  They said, OK, you can be on Wrestlemania if you get your head shaved.  And I was like, “Yes!”  So yeah, I was excited about it, it was my idea, they actually did it, and even though there wasn’t much of a storyline and people didn’t really love or hate me that much as a character at that time, I still was really happy to be able to do something memorable.”

Who came up with the “Molly-Go-Round” and who was the first wrestler to take the move?

“Well, what actually happened is that I had been working on a full twisting moonsault ever since I got hired from the WWF and was in developmental, cause I’m like when I debut in the WWF I’m going to do a full twisting moonsault for my finish.  Well, the day I have a match with Trish Stratus that I actually am going to do our finishing maneuver, I was practicing on a crash pad and I could not do it…So Dean Malenko said, you know, I saw Rey Mysterio do a front flip into a hurricanrana thing, but what if you just did a front flip and land on them…So, I got to practice it a couple of times just on some indy guys that were willing to take bumps from me in the afternoon, and it worked every time…I think Trish might have been the first one to take the Molly-Go-Round, but it was really Dean Malenko’s idea to save me from being fired for not having the move that I had planned originally.”