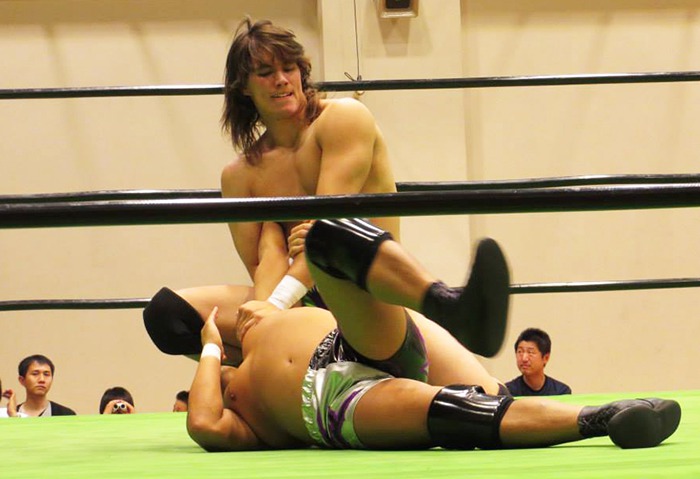 Editor’s note: This article originally appeared in the sports section of www.vernonmorningstar.com.  It was written by Kevin Mitchell.  Great to see the 2011 CAC Future Legend doing so well!

Clean the dorms for an hour to start the morning. Clean the dojo for an hour. Group training begins at 11 a.m. and includes 300 push-ups and squats, 60 back extensions, and 50 crunches and leg raises. Takes 90 minutes.

Then you wrestle, with short water breaks, for 90 minutes.

It was all part of a three-month Japanese pro wrestling camp with Noah Wrestling, an outfit which scouted Kelowna’s Kyle Sebastian last October at the Harley Race Wrestling Camp in Missouri.

“It took me three weeks to get into the groove and then I was able to do it pretty easily,” said Sebastian, 24, who fights his former tag team partner Adam Ryder in a main event of a Thrash Wrestling card Saturday night at the Schubert Centre.

“Now that I’ve trained in Japan, fans will see a completely different wrestling style from me, more aggressive and hard-hitting with more innovative moves,” said Sebastian, who works fire protection by day.

Originally from Lethbridge, where he was born Kyle Kristensen, the 6-foot-3, 195-pounder inherited interest in wrestling from his father, Jim.

“He used to train at the Hart Dungeon,” Kyle told The Morning Star. “I can’t be sure of the years, but he did train for a while and then met my mom (Susan) and figured out love was more important.”

Kyle was a young boy when he pulled off his first serious wrestling move.

He told SLAM! Wrestling: “I remember one day when I was about nine, I was wrestling with my dad on the bed. I went up to the top of the dresser and gave a huge crossbody onto him. Then, I hit the headboard and busted myself open the hard way. I had to get six stitches. I felt pretty tough. And that’s when I fell in love with wrestling.”

Sebastian trains nights and weekends and has plans to return to Japan permanently.

“My goals is to do this full-time in Japan. I want to go as long as I can. I saw wrestlers in their 60s over there.”

While in Japan, Sebastian also fell in love with chanko stew, or sumo soup, as it’s called.

“It was simply delicious. The young guys made it with five different flavours, including chicken and tofu.”

Jefferies is impressed by Sebastian.

“Ever since I saw Kyle wrestle four years ago, I have been very high on this young man,” said Jefferies. “As myself and The Honky Tonk Man have said many times, if there is a young man from the British Columbia independent wrestling scene who has the best chance and potential to make it big time, it is Kyle Sebastian.”

Tickets are $10 in advance and $15 the day of the show. They are available at: Schubert Centre, Ebenezers, Downtown Internet Cafe in Vernon; Bogarts in Armstrong, Tony O’s Outfitter in Enderby and the Snack Shack in Lumby.

The original article can be found here: