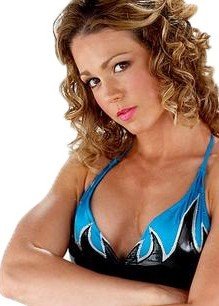 On the impact of Shimmer Wrestling on women’s wrestling:

“It gave us a way to display that girls don’t just do catfights…we’re not just managers…we actually get in there and we can actually go. It was nice to have that and to have people see it. The crowd that’s there is just amazing.”

On her reaction when TNA pitched the idea of shaving her head:

“We had kinda heard that they were looking for someone to do it…I thought about it and I didn’t really see what the big deal is. … I think the funniest part is when they approached me, I had asked ‘How much are you guys going to pay me to do it’ and their response was ‘Oh, you want to be paid to do that?’ I actually enjoyed doing it, they were the ones who actually made me grow my hair back. They wanted me to get extensions [before it grew back].”

On the “No Carpet/No Curtains” shirt she wore after shaving her head:

“They had no idea what that meant for so many months, and then finally someone—I think it was Dixie—said ‘Oh, she can’t wear that on TV!’”

On declining an invitation to appear on the all-Knockout PPV special:

“You can only get kicked so many times. … I think that I had finally had enough. They had trouble treating me very well to begin with and I felt like I was being a glutton for punishment every time I went back. … I felt like it was the right time to tell them no. It was like one of those bad relationships where you keep trying to get away from it. … You can’t treat people badly and then hope that they’ll come back and hang out. … A lot of the girls I’ve spoken to turned them down.”

On the pay for a TNA Knockout:

“I absolutely loved being a part of it. … I loved being a part of history [with the division]. That being said, I feel like they are not sure how to treat their employees. … There were multiple times where someone was working a day job while being on TV. You’re supposed to be an international TV star but you’re having to get a job tending bar or working at a Sunglass Hut. … From my experience I would see that was straight across the board [not just limited to Knockouts]. … They weren’t very biased about it.”

Nikki also talks about how she broke into the business, her training with Killer Kowalski’s wrestling school, the number of times she was the challenger for TNA’s Knockouts Championship, her involvement on competitive fitness modeling, her newest venture BonRoxx Fitness and their upcoming breast cancer awareness & fundraising event, “Search For The Tatas” (more information can be found at www.bonroxxfitness.com).