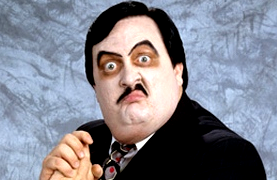 THQ and WWE Games have announced that their new game, WWE ’13, will feature Alberto Del Rio’s personal ring announcer, Ricardo Rodriguez, as well as the legendary manager, Paul Bearer. To celebrate, WWE Games caught up with the urn-holder himself for an extended talk about his time as an actual mortician, the evolving role of a manager in WWE, his favorite managers in history, favorite “Attitude Era” moments and his top three WWE Superstars—CM Punk, Daniel Bryan and Dolph Ziggler.

Bearer states, “CM Punk is outstanding. I put CM Punk above Cena. I never knew him until I came back when I got kidnapped by Edge. He has the mentality and the ability and the athleticism to perform. He picked up all of that on his own, from Taker and Kane and talking with those guys. He is like a sponge and he just picks up everything. I think he is fantastic. Cena is fantastic too, but Punk is, in my estimation, No. 1 on the roster.

“Daniel Bryan was in developmental when I was going to a different territory each week. He came from Shawn Michaels’ school. Shawn is one of the best in the business, and he taught Daniel Bryan right. He is not a CM Punk, but he is pretty close. He is really good at one he does.

“Dolph Ziggler…he had to grow on me. I had never heard of him before and he looks so much like Billy Gun. Certain things he does in the ring…I see Billy Gunn. He’s not Billy Gunn, but he is a fantastic performer. I have nothing bad to say about any of these guys – they are all really good at what they do.”

The legendary manager also discussed his association with The Undertaker and Kane.

“They are such great performers, such great athletes. Such great men, gentlemen in general. I am truly humbled that I have been allowed to be associated with them for all these years,” Bearer said. “When me and Taker first started, his first WrestleMania was my first WrestleMania, so we’ve really been together all that time. I get asked, would you have thought then, that he’d be still going in 2012? Hell no, I wouldn’t then and I’m sure that he wouldn’t have either. In the early years, me and Taker were together so much, I mean all the time. We had a very special relationship and a very special bond. It was such a perfect chemistry, a perfect meant-to-be thing. We were meant to be for each other, but we had no idea it would last this long.”

This thread is located at http://forums.onlineworldofwrestling.com/showthread.php/20159-Paul-Bearer-Talks-Top-Three-WWE-Stars-and-More