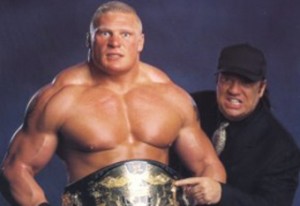 MMAjunkie recently talked with Paul Heyman and here are the highlights:

On if Lesnar is a UFC Hall of Famer: “Of course he is [a UFC Hall of Famer]. Listen, here’s the thing: Look at the three that he lost to, number one. Number two, what if Brock Lesnar did what everyone else did and said, ‘Feed me a guy every other month for three years so I’ll get six victories a year. I’ll be 18-0 before you put me in there with a Frank Mir, a former UFC heavyweight champion, or Randy Couture and the legends of legends in UFC. But he didn’t do that. He walked in and said give me your best.”

On how Lesnar improved in his UFC run: “You saw the speed, the size and improvement in every fight, and then this disease took everything away from him,” said Heyman, noting Lesnar’s personal battle demonstrated his championship qualities best in his three-year UFC stint. “You can see just how fragile an athlete’s life is and why athletes need to make so much money as fast as they can and never say, ‘I have 15 years on the contract.’ Because they don’t have 15 years on the contract. You have today on the contract because if you get injured today, tomorrow ain’t gonna happen.”

Defending Lesnar’s MMA record: “Five and three? But look at the five – and look at the three.”

Could Lesnar return to MMA and the UFC: “I think Dana White would love to have Brock Lesnar back. I think Lorenzo Fertitta would love to have Brock Lesnar back. Does Brock Lesnar want to go back? I don’t think Brock has anything to prove in the UFC anymore. He’s 35 years old. He made a lot of money in the UFC. His house and his farms and his cars and everything that he owns is paid for. Why would he go in and risk injury and concussions and risk any kind of physical damage when he doesn’t need to? That’s the thing you have to understand. How hungry can a fighter be when he has millions and millions of dollars in the bank? What’s there for him to gain? Another run as UFC heavyweight champion? Why would he do that? He’s the baddest dude on the planet, and he wasn’t shy about letting people know about that.”