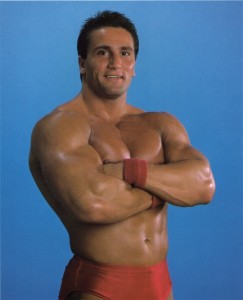 Since 2007, Paul Roma’s “Glorious” audio show on ClubWWI.com has caused controversy and offered some of the most unfiltered opinions on wrestling anywhere.  Now, Paul joins James Guttman for a special 90 minute edition that everyone has been waiting for.

One former guest that James Guttman brings up is Koko B. Ware.  Easy going and fun in his ClubWWI.com interview, Ware even took the time to sing some bars of “Piledriver.”  But, according to Paul, the birdman lost his feathers over something he thought Roma had said about him. It came to a head in the locker room at a WWF show…

“Had a run-in with Koko.  Yeah.  He was all amped up on something and he thought I said something about him.  He came up to me in the locker room and said, ‘Hey, Roma.  You got something to say about me?’ I’m like, ‘What are you talking about, dude?’ And he goes, ‘Yeah. Yeah.’  I’m like, ‘What are you talking about?’  He steps back like he wants to fight me and I’m like, ‘Dude, I’m not gonna fight you.’ I said, ‘ Get the f**k out of here’, just like that to him.  And he sucker punched me.

At this point, Ware pounced and Roma grabbed on.

“So I grabbed Koko in a reverse headlock and he slipped out. I went on my back and he was on top of me and I thought, ‘Aw, f**k.  I’m in a bad position here.  I gotta get this dude off of me.’ We stood up and I gave him a quick pop – like a jab – and startled him.  I said, ‘Dude, listen. I don’t want to fight with you. I don’t want to lose my job.’ Because they were pushing Koko at the time.  Who are (WWF management) gonna go after?  The agent got in between us and (Bobby) Heenan came up to me and said, ‘I know you didn’t start anything.’  I said, ‘Bobby, I don’t want to get fired, man.’  He said, ‘Listen, you want to straighten this out?  You want to settle this?  I’ll go to bat for you with Vince.’  I said, ‘Fine.’ We were in Chicago and I went downstairs and started pounding on (Koko’s) door – he had a separate locker room for him and the bird – and he’s like, ‘Who is it?’ I went, ‘It’s Roma.  Open the f**king door.  I’m gonna kick your f**king ass.’  He’s like, ‘F**k off!’  I called him everything in the book to get him to come out.  He wouldn’t come out.”

Roma explains how the story of the “fight” was changed by the next day and how agent Pat Patterson seemed to have a different account of events.  Eventually it was all straightened out professionally but not personally.  As the ClubWWI.com show continues, he explains the final discussion they had about it.