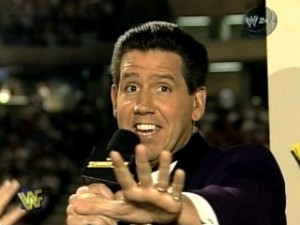 David Dexter reports on a recent story about Todd Pettengill.

Be careful the next time you pick up the phone. If you think the caller is being a little zany and over the top, odds are you’re getting pranked by award-winning radio broadcaster and former WWE announcer Todd Pettengill. Along with Scott Shannon, Todd co-hosts “Scott and Todd in the Morning,” a daily four-hour program broadcast each morning on 95.5 WPLJ in New York City. But he’s best known to WWE fans for his role as a host and backstage interviewer at numerous WWE events in the mid-90s and for his inimitable parody songs at the Slammy Awards.

Born in the small town of Hagaman, N.Y., Pettengill started in broadcasting at age 13.

“My mom knew a guy who ran the local station in Amsterdam, N.Y., WCSS,” Pettengill told WWEClassics.com. “She said, ‘You should go over there, you need a job.’ I’m thinking, ‘I’m 13, I need a job already?’ ”

Pettengill wasn’t an intern or errand boy. WCSS put the teenager on-air right away, making him a popular figure among his peers.

“It was cool, especially in high school,” he explained. “It’s a small town. You’re the big man on campus, saying, ‘I’ll mention you on my radio show.’ ”

The experience was invaluable and set Pettengill on a lifelong journey through the radio industry. He moved on to New York’s state capital Albany, one of the top 50 radio markets in the country at the time. Hosting a morning show, along with holding several different positions in programming over his six-year tenure in New York’s capital city, prepared him for the biggest move of his radio career.

In 1991, Pettengill headed south to New York City, joining the staff at WPLJ. Teaming up with Shannon, who had been hired shortly before him, the two found radio magic and have been on the air ever since.

As soon as he was hired, Pettengill was one of WWE’s go-to announcers. One of his first assignments was hosting the new show WWE Mania, which took a look at the wackier side of sports-entertainment. (WATCH) Todd also hosted Action Zone, Challenge, LiveWire, All American Wrestling, “WWE Superstars” and Challenge, in addition to interviewing duties on Raw and pay-per-views.

And like anyone who’s come through the doors at WWE, Pettengill remembers his first WrestleMania very well. His first Show of Shows was WrestleMania IX, which took place at Caesar’s Palace and was billed as “The World’s Largest Toga Party.”

“I had to call home and say, ‘I’ll be the guy in the toga,’ ” he recalled. “And then everyone was wearing togas.”

After ditching his Roman garb, Pettengill became an integral part of WWE’s announce team as the company began transitioning toward monthly pay-per-views. Todd began hosting 30-minute countdown shows before the events, which he looks back on fondly.

“Those were probably my favorite because I like to do things live,” he explained. “My background in radio helped with that.”

When WWE launched the In Your House series in 1995, Pettengill was given a monumental task. He and co-host Stephanie Wiand drew the lucky winner of a luxurious house given away at the inaugural event. Todd called the excited winner, Matt Pomposelli, and the rest was history.  He was, however, a little sour that the winner never gave him a call.

“He could have invited me over, I gave him the damn thing,” Pettengill joked. “Well, Mr. McMahon did, but I announced it.”

Pettengill even got to bring a little bit of his radio personality into the WWE Universe. At the 1996 and 1997 Slammy Awards, he opened the ceremonies with a side-splitting medley of song parodies poking fun at the Superstars. He regularly creates parodies for “Scott and Todd in the Morning” and jumped at the opportunity to work his magic for WWE.

After getting The Chairman’s approval, Pettengill went to work rewriting classic rock hits, TV theme songs and any other tunes he could rework to fit the wild world of WWE, like this number about Shawn Michaels, set to the tune of Eric Clapton’s “Cocaine”:

He’s the sexiest thing that ever stepped in the ring, Shawn is,
With his earrings and hair and his thong underwear, Shawn is
Such a stud, such a hunk. I said hunk, not Hulk, Shawn is!

Unleashing his rapid-fire hilarity on the Superstars at the annual award ceremony, Todd was glad that the Superstars didn’t take offense at his jabs.

“Everybody knows we’re there to entertain,” he said. “They were great, I think they actually enjoyed the songs.”

Despite having the time of his life with WWE, Todd decided he needed to scale back his schedule a little bit during summer 1997 after several years of trying to maintain a balance between his WWE duties, his gig at WPLJ and his personal life. He was using vacation days at WPLJ to free up time to work WWE pay-per-views and the grind was catching up with him.

“I didn’t get fired, I didn’t quit, my contract was up and I went in and said, ‘I can’t physically do this anymore, I need a break,’ ” Pettengill explained.

Though sad to see him go, WWE officials understood Todd’s situation. They did, however, ask him if he knew anyone that would be a good fit for the position. Pettengill ended up making a perfect recommendation.

“Michael Cole used to be my news guy in Albany,” Todd told WWEClassics.com. “I knew he’d do great there because he was a huge fan [going in]. He knew a hell of a lot more than I did.”

Today, Pettengill’s schedule is extremely busy. “Scott and Todd in the Morning” is still going strong, entering its 22nd year on the air. Going from 6 a.m. to 10 a.m. every morning, he and Scott Shannon, along with Joe “Monk” Pardavila and Cooper Lawrence, lampoon pop culture and entertainment, play today’s top music, along with some of Todd’s trademark parodies and prank calls.

To Todd, it hasn’t gotten old, either. He sees every day as something fresh.

“You’re talking about entertainment or music, it always changes,” he said. “It’s not like you’re coming to work for 22 years and doing the same thing every day. Even though we’re doing a four-hour radio show, it’s never the same show and you never know what’s going to happen.”

In addition to the New York radio show, Scott and Todd are going national. They’re featured on “Dish Nation,” a daily TV show that features radio hosts from across the country discussing the day’s events in pop culture. That keeps the WPLJ crew on their toes, as even during commercial breaks, they’re filming bits for each evening’s show, which is syndicated on stations around the country.

Outside of the radio station, Todd is the founder and CEO of Pettengill Productions.

“We shoot reality television, have filmed commercials in the past, we’re very busy with that and creating programming,” he explained. “We’re very close to selling a couple of our shows.”

In his “very limited” downtime, Todd enjoys spending time with his wife of 25 years, Carrie, and their two daughters, Hayley and Amanda.

Even though he’s been gone for 15 years, longtime fans still approach Pettengill and bring up his time with WWE, which surprises him.

“It’s flattering,” he said, though noting he said he has some detractors. “People love to hate and say ‘You were terrible,’ which is OK. I appreciate that people remember it.”

Pettengill now looks back at his time in WWE with a big smile.

“People sometimes post old stuff on my Facebook and I get a kick out of it,” he said. “It was a great chapter of my life, I had a great time and met a lot of amazing people.”

Though he fondly recalled a litany of announcer and Superstars he had the pleasure of working with, including The Million Dollar Man, “Macho Man” Randy Savage, Jim Ross, Michael Hayes and Howard Finkel, to name a few, Pettengill said he formed great relationships with the behind-the-scenes staff at WWE.

“At one point I was going to [WWE’s studios] three times a week,” he explained. “I really got to know those folks, the cameramen and technicians, the makeup artists and office staff, who were fantastic to work with. I still stay in touch with them to this day.”

“Scott and Todd in the Morning” airs Monday through Saturday on 95.5 WPLJ in the New York City area. Like them at Facebook.com/ScottandToddBigShow and follow them on Twitter @ScottandTodd.

”Dish Nation” airs nightly around the country. Go to DishNation.com to see when it’s on!

Check out Pettengill Productions at PetProdInc.com.

Not too long after coming to The Big Apple, Pettengill received a phone call that would present him with one of the most unique job opportunities in television.

“Mr. McMahon called me,” the DJ revealed. “He listened to the radio show and said, ‘You’re kind of funny, do you have any interest in coming up and auditioning for a job?’ ”

Pettengill, admittedly, wasn’t a wrestling fan and didn’t think the job was for him.

“I didn’t watch it as a kid,” he explained. “I’d see Mr. McMahon in his blue jacket once in a while, interviewing Andre the Giant, but I was never a huge fan growing up.”

The WWE Chairman, however, insisted that the radio host would be a good fit as a WWE announcer.

“He said, ‘That’s great, I want somebody who has an outside perspective, who can bring a different look to it,’ ” Pettengill told WWEClassics.com.

So he came north to WWE’s TV studio for an audition, the memories of which stuck with him for more than 20 years.

Pettengill quickly realized what the purpose of this unusual task was, and used his skills to storm through it.

“He knew right away whether I could think on my feet,” Pettengill explained. “Doing radio really helped because you have to fill time, you have to be able to talk and communicate.”

Todd impressed the WWE Chairman with his salesmanship and was hired. He was thrust into an unfamiliar universe with massive, hulking Superstars and gorgeous Divas. Pettengill, who said he wasn’t star struck coming into the job, found that his new co-workers were very cool.

“I think the only guy that ever gave me a hard time was Razor Ramon,” he recalled. “I used to have stubble and grew a mullet like him. He’d say, ‘Dude, you’re stealing my stuff. I have the stubble, I have the mullet.’ It was all in good fun.”