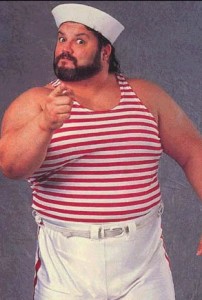 Recap of Tugboat on In Your Head Wrestling radio

What was his version of the story of the infamous night The Shockmaster debuted in WCW?

“That (the glittered helmet) was just to keep my identity, keep me under wraps…The wall was increased in height…Mike Graham’s the one who gave me the cue to go.  I had the mask on, holes drilled in it, but then the glitter was coming through.  So they took the secretary, cut off her panty hose, cut patches and glued them over the eye holes…That was to keep the glitter out of my eyes.  Mike told me I had to bust the wood, bust the 5/8-inch sheetrock that made up the set; I had to hit it hard…Well, I busted it all the way to my knees, and just like a teeter-totter, I hit it so hard it blew me over the top of the bottom.  Then the little helmet popped off, I turned away from the camera, and attempted to pop it back on my face, jump up, and do the promo.  ‘Cause I wasn’t down there long, if you watch the video…Dusty Rhodes, he was there along with the rest of them.  If you read their lips, there’s some funny things being said…I was the one that was the most upset that night; it would have been like about a minimum of a 12-pack drive back to my house.  I just got my stuff and when I was finished to head out the door, I pulled up to the Gorilla position, looked at Dusty, looked at Mike Graham, looked at the rest of them, shook my head, and walked out the door.  There’s no doing over a live deal.  What it is is what it is.”

What is the story behind Wrestlemania 8 when you were told to speed up your tag title match with Money, Inc. and Ted DiBiase wouldn’t do it?

“That’s true.  It was in Indianapolis, Indiana.  We were given the cue to go home as we were walking out to our intro music.  We went out to the ring, we told them, and they said ‘We’re doing our match!’  So we did the match, however long it was; we were out there for awhile.  After we finished the match, we went back to the curtain.  Vince was there, losing his mind yelling at us as we were walking through.  I said, ‘Don’t talk to me; talk to the captain out there.  I just did what I was told to do.’…How we all didn’t get fired from that deal I don’t know.”

Tugboat also discussed other topics, such as:

What famous wrestler trained him?

What made him decide to sign with the WWF over WCW?

Why did the Tugboat character have a shorter lifespan than the Typhoon character?

What famous wrestling family is he related to?

What legendary wrestler wrestled his first match against him?

Why did he and John Tenta (Earthquake) visit Stephen King’s house?