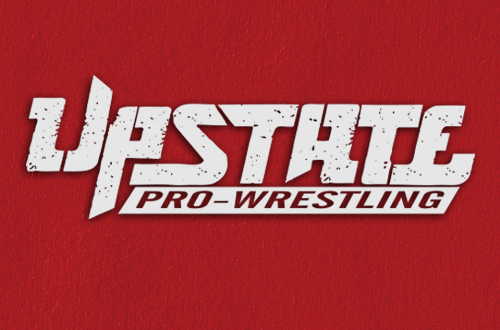 UPW returned to the Eagles Club in Rochester, New York Saturday July 11th for Red, White, and Bruised. New champions defended their titles, Several new stars made their debuts, One star returned to the company after an 8-year absence, and there were some heated grudge matches on the road to Headlocks & Homeruns 4. Here’s a recap of all the action.

Crosshairs Kelly vs. Yamaraj vs. Beefhammer vs. Brandon Fields vs. “All Passion” Ryan Cassidy vs. Vaughn Vertigo vs. LaDiva

Red, White, & Bruised’s first showcase match was a seven-way scramble featuring seven up-and comers who looked to make an impact in UPW. A great showing by all seven competitors, particularly Vertigo and LaDiva. But in the end, it was Ryan Cassidy who hit his patented CassiDDT on Vertigo for the three-count. A big win for the young up-and comer from Canada.

2. “The Pinnacle” Levi Connors vs. “The Flower City Kid” Milliman

The second showcase match featured The Flower City Kid Milliman who had possession of the No Limits Championship despite losing the title at Anniversary Anarchy 12. He faced another wrestler making his UPW debut in “The Pinnacle” Levi Connors. Connors used his size and strength to take control in the early going, but then Milliman’s new mean streak came out and gained control. Milliman seemed to have victory in hand until Mattick came out and distracted him, Milliman went for a top-rope cross body block, but Connors caught him, rolled through and delivered a fireman’s carry slam for the three-count. An upset victory for Connors and Mattick regained possession of his No Limits Championship added up to a bad evening for the Flower City Kid.

Red, White, & Bruised’s opening contest featured former UPW Heavyweight Champion and fan favorite Coconut Jones who looked to make his back into the title picture against Mr. Charisma Personified, Chris Cayden. Despite several impressive but unsuccessful showings, Cayden looked to finally gain his first signature singles win in UPW. Coconut took it to Cayden from the onset outside the ring, but Cayden sent Coconut into the steel ringpost to gain the upper hand. Coconut fought back and gained several near falls. But as Coconut went for his springboard spear, Cayden caught him coming in with a forearm that put down Jones for the three-count. Chris Cayden finally gets his first signature win in UPW.

2. Carter Mason vs. “The Bull of Black Mountain” Gabreal Saint

UPW’s Nightmare Man and Cape Fear Colossus Gabreal Saint was in action hoping to give the Canadian star Carter Mason a rude welcoming in his UPW debut. Back and forth match with Saint mostly in control but Mason refused to back down and gained several near falls. But in the end, Saint hit not one but two Cape Fear Fists on Mason which put him down for the three-count. A great showing by Mason but Saint comes out on top.

Another UPW student looked to make his mark as Steve Gauge took on the crazy one himself, “Sik” Rik Matrix. Gauge went for a pescado to the outside, but Matrix caught him and drove him into the ring apron. From there, it was all Matrix as he made short work of Gauge. After the match, things got very interesting. Bobby Dipinto came out and said he was tired of Matrix trying to end people’s careers and would no longer stand for it .This led to Matrix and Dipinto going at it despite the efforts of several wrestlers from the back and UPW officials trying to keep the two men separated. It seems that the issue between these two has just gotten started.

The self-proclaimed “textbook” star and UPW’s only “thinking man’s wrestler” did battle with the popular powerhouse in Victor Lord. Wessler used his smarts to take control in the early going, but Lord used his size and strength to gain the upper hand. As Lord had things going his way, the Professor took a short cut and nailed him with his textbook which led to a disqualification. It appears Professor Wessler cut his classroom session a little earlier than he would have liked, but Victor Lord might be the one taking the Professor to school if the two square off again in the future.

Special challenge six-man grudge tag team match made based on what happened at Anniversary Anarchy 12 when The Interstate Madmen attacked their opponents after the match and Colin Delaney and The Rochester Wrecking Crew got involved. Delaney and The Crew started out with the early advantage but Jock and the Madmen gained control isolating Delaney in their half of the ring. Eventually Hellcat would tag in and hit a twisting flatliner and stunner/facebuster on Dewey. Sweet hit a jumping legdrop on Dewey as the fight spilled to the outside, where Delaney hit 2 suicide dives to the outside. But as he went for a third, Samson nailed him with his cowbell on the end of his bullrope that he brought to the ring, unbeknownst to referee Richard Head. Samson dropped an elbow for good measure as Richard Head slid back in the ring to make the three-count. A huge victory for men from the Deep South, especially Samson who faces Delaney one-on-one at Headlocks & Homeruns 4.

“The Amazing Canadian” Lionel Knight vs. “The Young Lion of the West” Mattick (c)

Mattick who regained possession of his championship belt earlier in the evening, made his first title defense against a worthy and fierce competitor in Lionel Knight, a man making his return to UPW after a 8-year absence. Back and forth match with both men taking the fight to each other. Several big moves Knight hit including a springboard twisting legdrop and a brainbuster for near falls. But in the end, Mattick was able to hit his Made For Living finisher to get the victory. Hard-fought match by both men but the champion retains in his first title defense.

7. “Rain On Your Parade” Cloudy vs. “Your Captain” Nick Ando

Another grudge match took place here as two former best friend and members of the MOTN Lions went at it in this one. Cloudy with the early advantage but Ando gained control as the action went to the outside, Cloudy grabbed the ropes as Ando went for a springboard moonsault regaining the upper hand. Cloudy stayed in control but the Captain fought back. Both men exchanged near falls but it was Ando who hit his patented piledriver for the three-count. Ando gets the duke in this one, but one has to wonder if the war between these former best friends has just gotten started.

8. “The Leader of the Rebellion” Jet Rebel & “The Alpha & The Omega” Jason Savior vs. Tigerslayer 08 (Coleman “The Fight” Jackson & Krist Worthless)

Two teams who’ve recently formed in UPW did battle in this tag team match. Coleman outwrestled Savior to start out. He tagged in Worthless, but Rebel tripped up Worthless outside the ring, giving he and Savior the advantage. The two continued the attack including Savior sending Worthless into the steel guardrail outside the ring. Worthless eventually tagged in Coleman who cleaned house on his opponents. Coleman knocked Savior to the outside, isolating Rebel. Coleman hit a superkick on Rebel then Worthless delivered the shallow grave (cradle robber) for the three-count. Another victory for Tigerslayer 08 as they’ve started to gain some steam and move their way up the tag team ranks in UPW.

The main event of Red, White, & Bruised featured The Rican Senation Maximo
Suave making his first UPW Heavyweight Title defense against the “New Wave of Professional Wrestling” Cheech, who’s a former 2-time UPW Heavyweight Champion himself. Technical battle to start out with Cheech gaining the early edge. Maximo gained control, but Cheech regained the advantage and hit a brainbuster for a near fall. The champion hit a turnbuckle exploder and german suplex for near falls. Cheech hit a top rope rana and kneedrop for nearfalls. Maximo Suave then hit a superkick for a nearfall. A desperate Maximo grabbed his title and looked to use it on Cheech, but was stopped by referee Richard Head. As Richard was getting the title out of harm’s way, Maximo exposed the padding of the top turnbuckle. This led to Cheech’s demise as Maximo sent Cheech into the exposed turnbuckle and rolled him up for the three-count. Although his tactics were questionable, Maximo Suave was victorious in his first title defense as UPW Champion. But one has to wonder if the champion will maintain that momentum, and the gold, going into UPW’s biggest show of the year, Headlocks & Homeruns 4 August 1st.
Related ItemsUPW
← Previous Story New Breed Pro results from this past weekend
Next Story → Full Ring of Honor coverage