In an era where racism has again reared its ugly head in the state of Arizona, as well as through the Tea-bag…er, party’s racist antics in recent months, professional wrestler Sputnik Monroe’s unique life is even more useful to remember. 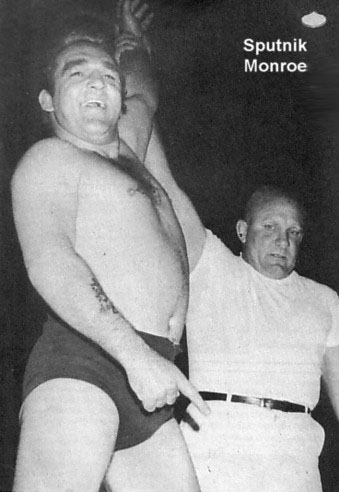 The way the business people would limit the black audience was by counting the number of black people allowed entrance into the auditorium, knowing exactly the seating capacity of the ‘blacks only’ section. Sputnik would bribe the employee, who counted black people, to lie to his boss, giving the boss a much lower number of attendees than there actually were.
So, when the overseer would demand numbers, the door guy would say something like ‘thirty’ when there were really five-hundred or more black folks in the building. 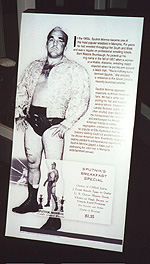 Where, at first, we’d gone to the matches hoping to see Sputnik get beat, we started to realize that he was pretty [email protected]#@ng cool. He had his audience, and he never played down to ’em, never talked down to ’em. He became a role model.’

But what Rocco Monroe Brumbaugh did defies description when you look through the eyes of the times. The southern United States featured an entrenched racism that is horrifying to look at retrospect…a racism that is rearing its ugly head again in the State of Arizona with their new anti-Latino laws…first to demand that people be able to prove that they’re legal to any Police officer who asks, any time of the day (not so subtle hint: they ain’t asking people who look anything like me, readers). The latest Arizona law is to outlaw “ethnic studies” curriculums. One wonders if Aryan cultiural studies would pass muster down there.

As the civil rights movement slowly unfolded through the 1950s and 1960s, blacks and whites lost their lives attempting to desegregate the South. As a young child, I remember hearing about a local Detroit-Area woman, Viola Liuzzo, who was murdered by racist whites for daring to do her part to desegrate the South.

Ask the family of Viola Liuzzo, a housewife and mother from Detroit, who drove alone to Alabama to help with the Selma march after seeing televised reports of the attack at the Edmund Pettus Bridge. She was driving marchers back to Selma.

Ask the family of Rev. James Reeb, a Unitarian minister beaten to death. Ask the families of James Chaney, Andrew Goodman, and Michael Schwerner who were murdered just for campaigning for voting rights….or the families of a hundred others .

There is little tangible reminder of what happened in those days in Memphis. The Ellis Auditorium was torn down in 1999 to make way for an expansion of the Memphis Cook County Convention Center. These days, most fans think of the Mid-South Coliseum or even the WMC TV studios when they think of Memphis wrestling….not the Ellis Auditorium, let alone what occurred there.

Nitzberg is still in the writing processs of the biographical movie. Nitzberg described Monrow as “… both a funny guy [and] a very dark, Jake LaMotta from ‘Raging Bull’ kind of character who hates racism but loves pissing people off. He loves hating racists and he loves getting them mad and pissing them off.”

The sooner Nitzberg can get this picture out the better, as it seems America needs to be reminded again about racism…particularly certain states within America.