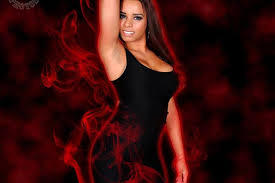 The women’s division has been RED HOT in the ECWA as of late! The reason being the crowning of a NEW ECWA Woman’s Champion and the crowning of the first ever Chick Fight Woman’s Super 8 Champion… the winner of both? “The Queen of the Carolina’s” and daughter of WWE Hall of Famer Tully Blanchard… TESSA BLANCHARD!

She came into the tournament as by far the least experienced wrestler and stole the show… both in and out of the ring. Fans flocked to the brunette beauty, her beautiful smile, and sweet demeanor. Right from the get go she was the most popular woman in the building. That went a very long way as she beat long time ring veteran Tina San Antonio, ECWA’s hellcat Renee Michelle, and globetrotting star Jenny Rose to win the Super 8 championship and the vacant ECWA Woman Championship.

Fans blew the roof of the building and mobbed Blanchard for pictures and autographs.  Even being in a famous wrestling family (which also includes former NWA star Magnum TA) couldn’t prepare her for all the love and support. Expressing time and time again how thankful she is and humbled by the experience, Tessa Blanchard is suddenly the hottest star in women’s wrestling!

All this hasn’t escaped the notice of Renee Michelle… who is a former ECWA Woman’s Champion in her own right… she’s out for revenge for not only Blanchard winning the gold Michelle feels she never lost but also for taking her out of the Super 8 tournament.

The champion is confident and riding a HUGE wave of momentum.

But Renee Michelle’s vast improvement in the ring and recent defeat of Gabby Gilbert (herself a Super 8 participant as well) has her also feeling the tournament loss was a fluke and that she WILL regain the ECWA Woman’s Championship.

Will Renee Michelle prove the ECWA is her company and that the gold belongs around her waist?

Or can Tessa Blanchard once again steal the show and keep dominating woman’s wrestling in the ECWA?

FIFTH AND FINAL MATCH OF THE BOSS’S CHALLENGE
GAUNTLET MATCH

*IF Saigon defeats all four opponents, he receives an ECWA Heavyweight Title Shot … IF he loses against any opponent, he must leave ECWA FOREVER!