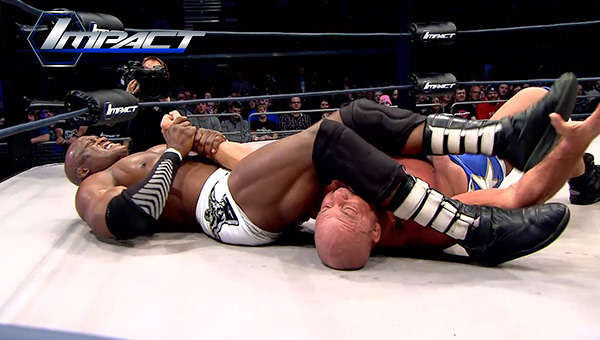 TNA Impact Wrestling spoilers from today’s tapings in London, England. These will air on March 20th:

Magnus and Bram came out brawling from backstage. Magnus beats Bram down with a chair. Mickie James helps Magnus beat Bram up and they powerbomb him on the stage.

Austin Aries comes out and wants his briefcase back. He challenges Samoa Joe and Low Ki to come out with it. They taunt him and Aries challenges Ki to a match with the briefcase and X Division Title on the line. Instead, Aries has to go through Joe first.

Austin Aries defeated Samoa Joe by DQ when Low Ki attacked him. Ki accidentally hits Joe with the briefcase. Aries grabs it and runs off after nailing Ki.

Rockstar Spud runs down immediately, cashes in his briefcase and defeats Ki to become the new X Division Champion.

James Storm defeated Matt Hardy in a good hardcore match. Storm had help from all of The Revolution and won with a superkick. After the match, they go to beat Hardy down but Grado makes the save to a huge pop. The Wolves also ran down for the save. Grado, The Wolves and Hardy danced after the match.

Kurt Angle defeated Bobby Lashley to become the new TNA World Heavyweight Title in the best match of the night. This match had lots of near finishes, counters and reversals, just a very good wrestling match. Angle ended up winning with an ankle lock.