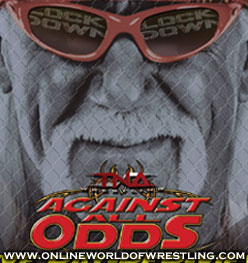 So instead of the show starting off with a video package, they open with Ric Flair freaking out about something that happened last Thursday (Editor’s note: Technically it happened weeks ago because the shows are taped in advance). I thought it was silly how unbelievably angry he was considering it happened 4 days ago. He acts like he just found it out! They cut to a video package, but it wasn’t all that great. They had already showed it twice during the countdown videos. Keep in mind this isn’t a recap like the things I do for SmackDown! RAW, or ECW. Its just my thoughts.

This was the match I was second most looking forward to, first being the TNA World Title match. This match was good like you would expect, although Desmond was made to look weak in my opinion, he lost pretty quickly. Desmond did have some creative offense at points though, including pulling back the middle rope and snapping it into Deniro’s face.  I was happy with Pope winning although I would have preferred Desmond. Pope won with the DDE fairly quickly. This was a good match but not as good as Desmond’s previous PPV matches. 3.5/5

This match, which I thought would be a lot better, was surprisingly slow moving, once again in my opinion, with a very weak finish. Matt Morgan was showing off a lot through out the match, and Hernandez did a suicide dive onto the ramp, injuring his shoulder (most likely kayfabe). Morgan told the ref to stop counting and when Hernandez got back into the ring he threw him shoulder first into the turnbuckle and pinned him for 3. I’m pretty sure a guy as big as Hernandez can take a little more damage. 2/5

I thought Ken winning was crap. Last month when Anderson made his botched return (I say botched because his match sucked and the fans turned on him in a matter of minutes), I thought that maybe it had to do with Abyss. He is a big guy and it might have been hard to do a lot of moves on him/ work with him. But that’s obviously not the case, because his first opponent tonight was Kurt Angle, one of the best in the business. The microphone didn’t come down properly, and Ken played it off as being intentional (something similar happened to him in the WWE once). Ken cut Kurt open with his dog tag at one point, because most of Kens offense is either cheating, kicking, or sleeper holds. He also managed to look like a main event star by tripping on Kurt’s foot at one point. Kurt did 95% of the work, but Anderson won in the end, by cheating and using a mic check for the 3. Ken maybe did 3 actual wrestling moves the entire match. 2/5

I was glad Abyss won because I think Mick Foley is a little too washed up to wrestle for title belts, I think he should just stick to his hardcore matches. Eric bischoff came up with some stipulation where if Abyss doesn’t use a barbed wire bat in the match, he has to remove his mask. Mick Foley spent the majority of the match trying to get Abyss to hit him with the bat, and attacking him too. Abyss didn’t want to hurt Mick with weapons, at one point instead of chokeslamming him onto the thumb tacks, he just chokeslammed him right next to the thumb tacks, which is still probably hurting him if you ask me! Eventually Abyss won by black hole slamming Foley onto the tacks. Foley was wearing a bunch of clothes so I’m pretty sure he was fine. 2/5

This was a technical masterpiece. Now that I’m done joking, the match wasn’t nearly as bad as I thought it would be, mainly because it was entertaining. Now I had never seen the Nasty boyz wrestle before this point, I grew up with the attitude era in WWF and never saw them before, but all I’ve been hearing is that they should not be wrestling and that Brian Knobbs is in horrible shape. Now that I’ve seen Knobbs wrestle I can’t help but agree. He was red in the face just from his pre match promo, he had a really stiff looking leg that he could barely move on, and his punches and kicks looked weaker than a 5 year olds! Funny side note, while they were slowly walking down the ramp the camera showed a fan giving them the thumbs down, and he had a Nasty Boyz shirt on! I realized how horrible he was when I was all excited that he was able to run across the ring at one point and even take a bump onto the floor, put him with anyone and they’ll come off as a star. They were both blown up basically a minute into the match, retreating outside of the ring a lot.  Anyway the match ended when Jimmy Hart, who doesn’t seem to age, showed up and threw Knobbs a helmet to smack Brother Ray with while the ref was distracted to get the win. After the match they stood on the ramp gloating while Hart wore the helmet (Editor’s note: I’m pretty sure he wore it because his head was right next to Brian and Jerry’s armpit stink, he needed it in case he passed out and smacked his head!). .5/5

This match was a lot better than Morgan’s last match. Morgan was gloating a lot in this match, most likely due to the size difference, and wouldn’t capitalize on a lot of his offense. The finish saw Morgan go for the carbon footprint, only Pope moved out of the way causing Morgan to get caught up at the turnbuckle. Pope hit a DDE for the 3. A nice looking one too, the one on Wolfe looked kind of weak, whereas this one hit hard! 3/5

I forgot to mention this before but its good seeing Jeremy Borash back, I was not a fan of him being taken off TV. I personally found this match a lot better then the one they had at Genesis, mainly because I went into Genesis with high hopes for Anderson (I remembered really liking him in WWE). Anderson did his usually almost no moves, which might work for someone like Ric Flair, but for Anderson it just makes his matches boring. Come to think of it, Ken Anderson should be Flairs protégé, not AJ, Ken has the look, he cheats in most of his matches, he’s pretty good on the mic, and he barely does any wrestling moves! Anyway Anderson hit the mic check eventually for the win. 1.5/5

This match was no where near as good as some of the matches they had back in 05/06, most likely because of AJ’s new heel style. The match was pretty good, only problem, this happened at Genesis too, is that by this point in the Pay Per View I’m staring to lose interest because of the disappointment from the beginning two hours. Eric Bischoff called it down the middle, although he was a very slow counter. Samoa Joe came off as very weak in this match, getting taken down relatively easy. Especially compared to when Joe was an unstoppable monster back in his early TNA days. Samoa Joe hit the muscle buster and could have won around the end, but Bischoff was outside of the ring arguing with Flair. Samoa Joe yelled at Bischoff and walked into a pele kick, which grounded him easily, followed by the Styles clash for the win. 3.75/5

Before the match started The Pope was attacked by Scott Hall and Syxxpac. I guess Hogans awesome security couldn’t keep two junkies from strolling in (no offense to anyone who’s a big fan of Pac or Hall, I used to really like both of them too). Anyway they beat up on Pope a little bit, but he sold it like he was run over. Anderson capitalized on this by beating on Pope as he struggled down the ramp, and breaking the count every 8 seconds to continue. One thing I like about Anderson, is he was able to generate some real heat with me, I used to really like the guy, now I can’t stand him! I also liked how he would wave at the ref or pose whenever he broke the count. This match actually told a pretty good story as Pope struggled to fight back through out, even if he did completely over sell that beating. Pope hit the DDE at one point but Ken kicked out. Ken nearly won with the mic check late in the match but Pope kicked out, causing me to Mark out a bit. Although I find it unrealistic that neither Wolfe nor Morgan could kick out of a DDE, same goes for Angle nor Abyss being able to kick out of a mic check, yet Pope and Anderson were able too, especially considering Pope had just been beaten up “bad” and they had both wrestled two times already. Whatever. Anderson hit the Finlay roll, and tried for a Kenton bomb, but Pope moved out of the way and hit a second DDE for the 3! I was very happy about this. 3.25/5

Overall this pay per view wasn’t very good at all, it was a good premise, except for the Nasty Boyz Team 3D feud, but they just didn’t capitalize. The second below average TNA pay per view in a row, I wonder if they’ll go for the hat trick with Destination X next month. Seems like Hogan/Bischoff haven’t been good for the pay per views (I don’t really watch iMPACT anymore, but I do read up on it and it seems like they’re turning it more into a soap opera than a wrestling show). Overall I think the pay per view gets maybe a 6/10, I’ve never been that good at ranking things though.