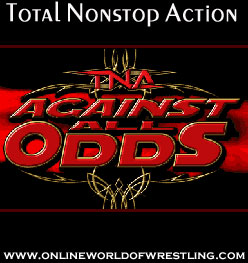 VIDEO PACKAGE: Hyping the main event tonight where Bobby Roode is against all odds by defending his title against 3 of his rivals and Sting as special enforcer.

#1 CONTENDERS MATCH FOR THE X-DIVISIONTITLE

Zema Ion defeated Jesse Sorenson by count out: Sorenson tried to do a flip to the outside but appeared to hurt his neck really badly. He suffered a bad neck injury and will be out for around a year. Best wishes to him and hope he makes a quick recovery.

Bobby Roode & Christy Hemme: Bobby Roode spoke about his opponents tonight and says he will be the better man and walkout World Champ tonight. Roode says Sting will finally know why he is the it factor of pro wrestling and the most dominant champion ever.

Robbie E ( w/Robbie T) defeated Shannon Moore to retain the TNA Television Title: Robbie E issued a open challenge to anyone in the back and it was answered by Shannon Moore.

James Storm & Christy Hemme: James Storm said he is coming for revenge and will walk out tonight as the new World Champion

Samoa Joe & Magnus defeated Matt Morgan & Crimson to win the TNA Tag Team Titles: At the endboth tag teams had a miscommunication eventually Joe/Magnus did a double team and Magnus got the pin over Morgan. We have new tag team champions!

Bully-Ray & Christy Hemme: Bully-Ray cussed Christy Hemme and told her to get lost. He said he has Storm’s/Hardys number, he is in Roode’s head and in the best shapeof his life.

Jeff Hardy & Christy Hemme: Jeff Hardy said he has recovered from that beat down, he said he is against all odds but will win and gave a shout out to his creatures.

Sting & Christy Hemme: Sting came in and said ITS SHOWTIME

Bobby Roode defeated Jeff Hardy and James Storm and Bully-Ray to retain the TNA World Title:  Sting was the special enforcer…..  The referee was knocked out, Roode wanted to use the bell but Sting took it away from him and was about to hit him but Roode ducked and he hit Hardy, then he gave the pin so Roode could retain.