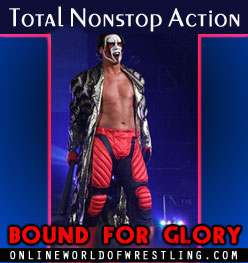 STEEL ASYLUM X-DIVISION #! CONTENDERS MATCH
“Black Machismo” Jay Lethal defeated Sonjay Dutt (w/So-Cal Val) and Chris Sabin and Alex Shelley and Shark Boy and Curry Man and Super Eric and Petey Williams and Jimmy Rave (w/Christy Hemme) and Johnny Devine: In order to win this match, a wrestler must climb up a cage and along a dome roof before crawling through a small hole in the middle and stand on top of the asylum to earn a future shot at the X-Division title. Shark Boy did a really cool Double Dead See Drop on two of his opponents. Four guys teamed up to give simultaneous suplexes to the Prince Justice Brotherhood. This was a petty impressive match to start the show, but the one crazy high spot came when Curry Man was nearing the hole but was knocked off, crashing down to the ring below! Jay Lethal and Sonjay Dutt literally hung upside down punching each other before Lethal got the advantage and crawled out through the top of the cage to win the match and claim number one contendership!

BACKSTAGE SEGMENT
Jeremy Borash & Jim Cornette + Mick Foley + The Beautiful People (Angelina Love & Velvet Sky): Mick Foley arrived and Jim Cornette praised him endlessly and gave Foley control of his office while he left for a meeting with some top executives at Spike TV. The Beautiful People came in and complained about TNA management giving them all different colors of M&M’s when they asked for ONLY blue. Love & Sky insulted Foley’s wardrobe, and he said his shirt was made of shammy. Love & Sky left and Foley said he liked his shammy, but Jeremy Borash remarked, “wouldn’t you rather be in velvet?” Foley laughed hysterically and called for a Borat-style “high five!”

BACKSTAGE INTERVIEW
Lauren Brooke & Consequences Creed: Consequences Creed cut a promo on Sheik Abdul Bashir for how he talks about the United States. Creed said tonight the glory will be ours, every man, woman, and child, who is proud to call America home.

TNA X-DIVISION TITLE MATCH
Sheik Abdul Bashir defeated Consequences Cree to retain the TNA X-Division title: Sgt. Daniel Casara, a charismatic American soldier injured while serving his country (and a huge TNA fan), was brought out before the match and performed the ring introductions for the challenger, Consequences Creed. The Sheik screamed some disrespectful stuff in Arabic as Sgt. Casara was exiting the ringside area. It could have been a lot worse. The Sheik scored the pin on Creed after rolling him up and holding the ropes for leverage. Both wrestlers performed above expectations, so it ended up being a pretty good match.

BACKSTAGE SEGMENT
Jeremy Borash & Mick Foley + Awesome Kong & Raesha Saed: Mick Foley was caught telling Jeremy Borash about his famous Hell in a Cell match with the Undertaker. Raesha Saed & Awesome Kong burst in and Saed screamed at Foley and actually said “it doesn’t matter why you are here!” Foley said that was gimmick infringement and threatened to call the Rock. Saed screamed that Kong will not be responsible for what happens to Taylor and Roxxi tonight. Foley said that Saed is misunderstood and is in need of a visit from Yirple the Clown.

TNA KNOCKOUTS TITLE 3-WAY MATCH
Taylor Wilde defeated “The Hardcore Knockout” Roxxi and Awesome Kong w/Raesha Saed to retain the TNA Knockout’s title: Awesome Kong was quite dominant, but Taylor and Roxxi held their own for most of the match. Taylor Wilde retained her title when she pinned Roxxi after Awesome Kong took a fall outside the ring to the floor.

BACKSTAGE SEGMENT
Jeremy Borash & Mick Foley + A.J. Styles + Team 3-D (Brother Ray & Devon) + Jim Cornette: A.J. Styles was shown praising Mick Foley (actually kissing his ass big time) and saying how great it was to see him in TNA. Team 3-D burst in and got on A.J.’s case for being such a mark for Mick Foley. Foley told Styles to go get ready for his match, and then got on Brother Ray’s case for stealing his red flannel gimmick. Team 3-D said they do whatever they want in TNA and bragged about their 20 championship reigns. Brother Ray said if Foley stays out of their way then they’ll stay out of his way. Foley said one day he’ll shut their mouths but right now he has to get ready to referee a match later. Jim Cornette came back glowing with happiness and sent Foley off to prepare for his match.

MONSTERS BALL TAG TEAM TITLE MATCH
Beer Money Inc. (Robert Roode & James Storm w/Jackie Moore) defeated Matt Morgan & Abyss and Team 3-D (Brothers Ray & Devon) and LAX (Homicide & Hernandez) to retain the TNA World Tag Team titles: The special guest referee for this match was former WCW Four Horsemen, Steve “Mongo” McMichael – who looks….. DIFFERENT. Mongo pretty much sat back and let the carnage unfold without interruptions. Homicide did a really hot Tope Con Hilo onto Beer Money at ringside, followed by Hernandez doing a Super Man dive over the top rope onto Beer Money! Homicide shattered a crutch over Brother Devon’s back and then carved Devon up with a fork! Brother Ray used a cheese grater to scrap and peel the flesh of Abyss. Brother Ray did a Super-plex on Hernandez into the ring. Mongo was a slow counter but he counted equally slow for everybody. Abyss was doing good avoiding all the weapons but James Storm distracted him with a bag of thumb-tacks. Referee Mongo took the bag of tacks from Beer Money, who then challenged Mongo to a football stand-off. Mongo lined up in a 3-point stance and sent James Storm flying threw the ropes and tackled Robert Roode (sort of). Matt Morgan did a Cross-bodyblock from Hell off the top rope onto Hernandez & Beer Money on the floor. Team 3-D dragged Abyss up to the stage, and pierced the bloody head of Abyss with staples! Abyss started to fight back, but Johnny Devine came out and cracked Abyss with a kendo stick! Devine set up a table under the stage and Team 3-D set it on fire with lighter fluid!! Team 3-D then power-bombed Abyss off the stage through the flamming table!!!!!!!! Abyss rolled over and was his entire backside was literally on fire for a couple seconds before a crew member put him out with a fire extinguisher. Spot of the night. Back at the ring, Hernandez wrapped a kendo stick around Storm’s neck – OUCH! Team 3-D let the other guys beat each other up before returning to the ring and hitting the What’s Up Drop on Homicide. Hernandez set up a table in the middle of the ring and grabbed the bag of tacks. Hernandez couldn’t get the bag open, so Mongo stepped in to help out and poured the tacks out on top of the table. Team 3-D planted Hernandez with the 3-D on the table with tacks! James Storm came in and spit beer in Devon’s face and Robert Roode stole the pin on Hernandez to retain the TNA World Tag Team titles! Really hot match.

TRIPLE THREAT MATCH
Booker T (w/Sharmell) defeated Christian Cage and A.J. Styles: A.J. Styles worked his ass off for this match, pushing the envelope and pulling out a couple new moves in the process. The story of the match was that A.J. Styles represented the “young lions” of TNA and Booker T represented the “veterans” – while Christian Cage remains neutral. The finish saw Christian hit the Unprettier on Styles off the second rope and Booker T hit a top rope Axe Kick on Christian for the win! I was hoping we would find out what was in Booker T’s mystery briefcase but this was not revealed tonight.

SPECIAL GRUDGE MATCH
Jeff Jarrett defeated Kurt Angle: Excellent match which will go down as one of the greatest in TNA history. Mick Foley was the special outside enforcer, basically standing at ringside maintaining law and order. Jeff Jarrett had Kurt Angle in the Figure-4 Leglock for quite some time, but Angle eventually made it to the ropes. A few minutes later, Angle applied the Ankle-lock on Jarrett, who managed to reach the ropes and break the hold as well. Angle attempted his famous Moonsault, but Jarrett moved and Angle crashed and burned. The referee was bumped and Mick Foley immediately slid into the ring to take his place. Mick Foley tried to block Angle from using a chair, but Angle whacked Foley HARDCORE on the side of the head with the chair! Angle then jumped into the ring and whacked Jarrett with the chair before going for the pin. The referee woke up started to count but Mick Foley pulled him out of the ring! Foley pulled out The Sock (they can’t call it Mr. Socko) and gave Angle the Mandible Claw! Jarrett smashed a guitar over Angle’s head and made the cover while Mick Foley counted the 1-2-3.

TNA WORLD HEAVYWEIGHT TITLE MATCH
Sting defeated Samoa Joe to capture the TNA World Heavyweight title: They showed some pre-match preparation footage in order to build up a big-fight atmosphere. They started the match brawling through the crowd and up into the stands. Joe did an insane Torpedo Drop-kick out of a luxury box landing on the cement steps and crotching himself on a metal safety railing. Once they got back into the ring, Sting hit Joe with a Muscle-buster (Joe’s move) but Joe no-sold it. A few moments later, Joe hit Sting with a Scorpion Death-drop (Sting’s move) and Sting no-sold it! Kevin Nash showed up and stood at ringside watching the match. Nash took the bat away from Sting, only to turn heel and crack Samoa Joe on the back as he was bouncing off the ropes!