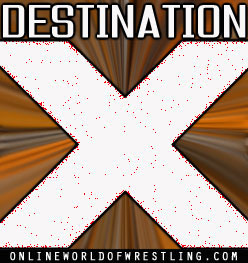 SIX-KNOCKOUTS TAG TEAM MATCH
Roxxi & Taylor Wilde & The Governor defeated The Beautiful People (Angelina Love & Velvet Sky & Madison Rayne): Cute Kip was not there and they didn’t even mention his name throughout the match… maybe Santa finally got my letter and he is gone from TNA? Taylor Wilde pinned Madison Rayne with a bridging German suplex..

OPEN CHALLENGE MATCH
Brutus Magnus defeated Eric Young: The special guest ring announcer was Jesse Neal – he served on the USS Cole in the US Navy in Iraq and introduced Eric Young. [Editor’s Note: The Navy veteran, Jesse Neal, who legitimately was a Navy vet, is a guy from the Team 3-D wrestling school. “Bernie Weber” was Mike Weber, who worked in marketing for WCW and now for TNA.]

IN THE RING
Sheik Abdul Bashir + Jim Cornette: The Sheik came down and complained about being left off the last few PPV’s. The Sheik said he was a victim of discrimination. Jim Cornette came out and explained that the Sheik wasn’t on the PPV because nobody likes him or his whining. Cornette had the Sheik removed from the building, while Jesse Neal sang “God Bless America.”

BACKSTAGE SEGMENT
Jeremy Borash & The Main Event Mafia (Kurt Angle & Kevin Nash & Scott Steiner & Booker T): Kurt Angle tried to turn the Mafia guys against Sting. Booker T said he had to deal with A.J. Styles, and left. Scott Steiner said he had to deal with Samoa Joe, and left. Kevin Nash told Angle it was his own fault for starting things with Sting and needs to make it right.

MATCH OF 10,000 THUMB-TACKS
Matt Morgan defeated Abyss: This brutal hardcore match ended with Matt Morgan kicking Abyss off the stage through a table with a large tray of tacks sitting on top.

BACKSTAGE SEGMENT: Booker T (w/Sharmell) protested having to defend the Legend’s title against A.J. Styles, but TNA management’s Jim Cornette said the decision stands. Booker T said he will bring in an attorny to dispute it…

IN THE RING
Jeremy Borash & ODB: The final three participants in the “Win a Date with ODB” contest were Cody Deaner (a contracted wrestler out of TNA), Shark Boy, and some rich guy named Bernie Weber. ODB asked her suiters some questions and then made them dance. ODB picked Cody Deaner.

SUPER GRUDGE MATCH
Scott Steiner defeated Samoe Joe by DQ: Samoe Joe snapped and attacked the referee about two minutes into the match. There was a post match brawl..

ULTIMATE-X MATCH FOR THE TNA X-DIVISION TITLE
SUICIDE (Christopher Daniels) defeated Alex Shelley (c) and Chris Sabin and Jay Lethal and Consequences Creed to WIN the TNA X-Division title: Match of the night, with tons of crazy stunts that electrified the audience. The finish saw Alex Shelley, Chris Sabin, and Consequences Creed hanging from the wires fighting for the belt when SUICIDE made a dangerous leap to the center, knocking the other three competitors down to the mat, before grabbing the belt and claiming the X-Division championship!

TNA WORLD HEAVYWEIGHT TITLE MATCH
Sting defeated Kurt Angle to retain the TNA World Heavyweight title: Jeff Jarrett was the special guest referee and Mick Foley was the special outside enforcer – to make sure nobody from the Main Event Mafia gets involved in the match. Midway through the match, Angle accidentally clotheslined Jarrett, and Foley came in to check on him. Meanwhile Sting applied the Scorpion Deathlock and Angle began to tap, but neither Jarrett or Foley saw it. Sting released the hold and checked out Jarrett, only to get Angleslammed by Angle. Foley reluctantly made a two count. Angle protested the count, and low-blowed Foley to take him out. Angle found a chair, but Foley recovered and snatched the chair away. Foley swung the chair at Angle, but accidentally whacked Sting! Angle knocked Foley out of the ring, and covered Sting for a two-count made by a groggy Jeff Jarrett. Angle protested and spit in Jarrett’s face, before throwing a punch, and Jarrett fired back! Sting planted Angle with a Scorpion Death Drop and scored the pin to retain the TNA World Heavyweight title! Sting had some words with Mick Foley before celebrating his successful title defense… Angle screamed at Jarrett, making it very clear that he hates him with a passion!