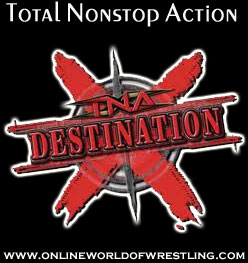 VIDEO PACKAGE: Brien Kendrick versus Abyss feud in which Immortal have tried to destroy the X-Division. Kendrick has said if he loses tonight the X-Division is dead.

COMMENTATORS BOOTH: Mike Tenay & Jeremy Borash are on commentary as Taz is away due to family reasons. JB was much better and this is a perfect combination, but why not use Don West a massive X-Division fan? The 6 sided ring is back for one night only!

SINGLES MATCH
Kazarian defeated Samoa Joe: Kazarian pinned Joe after another referee decision went against him. He was pissed off.

X-DIVISION FLASHBACK: Unbreakable 2005: A.J. Styles versus Christopher Daniels versus Samoa Joe, one of the best TNA Matches in history.

OPEN CHALLENGE MATCH
Douglas Williams w/ (Magnus & Rob Terry) defeated Mark Haskins: Williams told his partners to go backstage. Haskins is British and was at the London TNA show I was at, he was dressed like “The” Brian Kendrick. After a decent bought Haskins missed the shooting star press and Williams rolled him up for the win. Afterwards they shook hands.

BACKSTAGE INTERVIEW
So Cal Val & Austin Aries: Austin Aries told everyone who was watching this PPV via a illegal stream should choke on their food. He promised he could beat anyone on this roster and he will start tonight by winning the Impact Wrestling Contract.

BACKSTAGE SEGMENT
Christopher Daniels & ?????? + A.J. Styles: Daniels was talking to someone, behind him A.J. Styles arrived and they shook each others hand and promised to tear it up tonight.

BACKSTAGE INTERVIEW
So Cal Val & Zema Ion: Zema Ion proved he can beat anyone and is willing to prove a point tonight.

ULTIMATE X MATCH FOR THE #1 CONTENDERSHIP FOR THE X-DIVISION TITLE
Alex Shelley defeated Shannon Moore and Amazing Red and Robbie E ( w/Cookie): The usual X-Divison with a lot of dives, dangerous and cool spots. In the end Shannon Moore climbed to the top of the structure, he knocked Red and Robbie E as they crashed to the floor,however before he grabbed the X, Shelley came in and kicked him off and reclaimed the X. After the match Chris Sabin came out to congratulate Alex Shelley.

BACKSTAGE INTERVIEW
So Cal Val & Low-Ki: Low-Ki promised he will the contract tonight.

SINGLES MATCH
Rob Van Dam defeated Jerry Lynn: This match was 11 years in the making, it showed they can still go. RVD won after a frog splash over long time rival and friend.

BACKSTAGE INTERVIEW
So Cal Val & Jack Evans: Jack Evans tonight is a once in a lifetime opportunity and he will grab it.

IMPACT WRESTLING CONTRACT FATAL FOUR WAY MATCH
Austin Aries defeated Low-Ki and Jack Evans and Zema Ion to win the contract: This match was brilliant. Loads of chants saying “sign them all up”. Please TNA do it. Incredible four way. . Evans called for the 630 splash, but Ion knocked him off the top. Ion then nailed a 450 Splash on Ki, but Aries broke up a pin. Evans then tried the 630 Splash on Ki, but Ki got his knees up. Aries followed with lightning kicks on everyone before dropping Ki with a brainbuster and won the contract.

RINGSIDE INTERVIEW: So Cal Val got a few words from Austin Aires who said he is the greatest man that has ever lived and walked away.

TNA X-DIVISION TITLE MATCH
Brian Kendrick defeated Abyss to win the TNA X-Division Title: The ref was knocked down, suddenly Bischoff came down and threatened Kendrick who knocked him out,Immortal came down but X-Division stars did as well such as: Generation Me, SharkBoy and Amazing Red but they were all taken out. Then more came out: Kazarian, Douglas Williams, Robbie E, Shannon Moore, Austin Aries, Alex Shelley, Eric Young and they out-powered Immortal, Abyss attempted a chokeslam but Kendrick rolled him up and won the belt! The X-Division starts got in the ring with Kendrick when red confetti fell on him, Kendrick shook everyone’s hands around the ring. Abyss was pissed and shoved Bully-Ray on the ramp.

X-DIVISION LEGENDS MATCH
A.J. Styles defeated Christopher Daniels: A.J. won with the spiral tap, the fans sounded there appreciation. The best friends shook hands and hugged after the match. One of the best TNA PPV’S in a while.