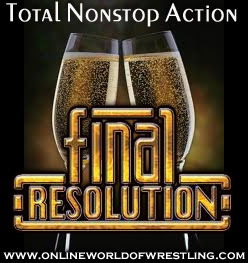 ANNOUNCERS BOOTH
Mike Tenay and Taz welcome us to the PPV and preview the three main matches fortonight.

BACKSTAGEINTERVIEW
Jeremy Borash & Mickie James:. Mickie said she was excited to hear Gail was coming back toTNA but she has done nothing but politic and play hide-and-seek since shereturned. Mickie says they will see who the best Knockouts Champion is.

TELEVISION TITLEMATCH
Robbie E (w/Robbie T) defeated Eric Young to retain the Television Title: Young gets Robbie and Terry on his shoulders but drops themafter they became too heavy. Young dropkicks Terry to the floor but turnsaround to a codebreaker from Robbie for the win.

BACKSTAGE INTERVIEW
Jeremy Borash & “The Pope” D Angelo Dinero & Devon: Devon says the only issue they have ever had is the influence Popehas on his sons. Devon said tonight isn’t thenight for that, it’s all about the TNA Tag Team Titles.. Pope agreed, tonightit’s about the gold.

BACKSTAGE SEGMENT
Jeremy Borash & Jeff & Karen Jarrett + Sting: They are upset about the possibility of losing their jobs.Jarrett says he was just on the Coastal Chaos Cruise being a company man whenhe got the news about tonight’s match and Karen. Jeff cuts a promo on JeffHardy when Sting walks in and taunts them. Sting has a pair of handcuffs andasks Karen if she’s ready.

#1 CONTENDERS/LOSERLEAVES TNA STEEL CAGE GRUDGE MATCH
Jeff Hardy defeated Jeff Jarrett: As a result Jeff Hardy faces Bobby Roode next month at Genesis and one of the Jarrett’s will be fired this week on iMPACT. Karen washandcuffed to Sting. Hardy hit the win after a twist of fate.

BACKSTAGE INTERVIEW
Jeremy Borash & Bobby Roode: Roode said he will be known as the king of the Iron Man matches after tonight. He said he spits in the face of authority, just askDixie Carter

TNA World Heavyweight champion Bobby Roode vs A.J Styles fought to a draw: It was tied at 3-3 when the time expired. Roode celebratedwhile Styles was in agony.