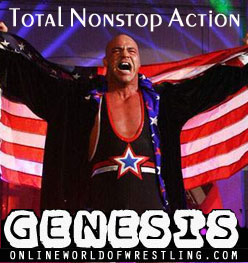 RINGSIDE ANNOUNCEMENT: Mike Tenay opened the show with the announcement that Rhino was not there and nobody could find him. Don West said something didn’t smell right about the situation..

BACKSTAGE SEGMENT: Jim Cornette grilled Scott Steiner about the whereabouts of Rhino. Steiner said Rhino was a drunk and suggested they look in the gutters for him..

TNA X-DIVISION TITLE TOURNAMENT FINALS
Alex Shelley defeated Chris Sabin to win the vacant TNA X-Division title: This was an excellent match worthy of Match of the Year consideration! Alex Shelley faked an ankle injury and Chris Sabin showed sympathy for him. Shelley pinned Sabin with a quick roll-up to capture the TNA X-Division title! After the match, Shelley hugged Sabin, but Sabin wasn’t too keen on the idea of being a gracious loser..

GRUDGE MATCH
Shane Sewell defeated Sheik Abdul Bashir: The Sheik got into it with referee Earl Hebner, who slapped him across the face! So it’s alright for Hebner, but not for Sewell? The Sheik started chasing Hebner around the ring, until Sewell flattened the Sheik with a clotheline and put him down for the 1-2-3 with a Sunset Flip. Other TNA referees hit the ring to celebrate with Shane Sewell..

BACKSTAGE SEGMENT: Jim Cornette grilled Booker T & Sharmell about the whereabouts of Rhino. Booker T threatened Cornette, but Shane Sewell came back from his match and stopped Booker from doing any damage. Booker T told Sewell not to put his hands on him ever again….

TNA WORLD TAG TEAM TITLE 3-WAY
Beer Money Inc. (Robert Roode & James Storm w/Jackie Moore) defeated Consequences Creed & Jay Lethal and Matt Morgan & Abyss to recapture the TNA World Tag Team titles: Abyss tried to get “hardcore” and went to knock Robert Roode out with a belt shot but missed and whacked Matt Morgan by mistake. Jackie Moore distracted the referee while Jay Lethal hit the flying elbow off the top rope onto Roode. James Storm came in and super-kicked Lethal, and put Roode on top for the 1-2-3 to steal the match. Matt Morgan and Abyss argued after the match.

BACKSTAGE SEGMENT: A furious Kurt Angle admitted to Jim Cornette that he made Rhino and offer earlier today. Angle said when Rhino refused he beat up him in a parking lot – so Rhino won’t be there tonight and suggested Cornette find a replacement. Angle then threatened to cripple Jeff Jarrett in their match tonight and take control of TNA.

SIX-KNOCKOUT TAG TEAM MATCH
ODB & Taylor Wilde & Roxxi Leaveaux defeated Raisha Saed & Rhaka Khan & Sonjourner Bolt: They announced earlier that Christy Hemme could not make her scheduled title shot due to a legit injury. TNA Knockout’s champion Awesome Kong was also suffering from a bad back, but they didn’t come out and say that. This replacement match was booked, and the winner of the pinfall would get the next title shot against Kong. ODB pinned Raisha and had a show-down with Awesome Kong — Kong choke-slammed ODB!

NO-DQ SUPER GRUDGE MATCH
Kurt Angle defeated Jeff Jarrett: Both wrestlers bled heavily. Kurt Angle did an Angle-slam off the stage, putting Jeff Jarrett through a table! Angle would later win by pinfall, and then “break” Jarrett’s ankle in a folding chair! Jarrett was stretchered out of the six sided ring.

TNA WORLD HEAVYWEIGHT TITLE MATCH
Sting defeated “The War Machine” Rhino to retain the TNA World Heavyweight title: Mike Tenay & Don West opened the show with the announcement that Rhino was not there and nobody could find him.. Later Kurt Angle admitted that he had assaulted Rhino in a parking lot that afternoon. Rhino did, in fact, show up selling a back injury with his head bandaged. Sting was suffering from sore knees, which is why they did all the gimmick stuff to cover for his lack of mobility during the match. The crowd booed Rhino and cheered the heel (Sting) – what did they expect, it was Charlotte. Rhino missed a GORe and Sting finished him off with a Scorpion Death Drop. Sting broke character and was a total babyface for the Charlotte fans.

MAIN EVENT
A.J. Styles & Brother Devon & Mick Foley defeated Booker T & Scott Steiner & Kip James (sub for Kevin Nash): Earlier they announced that Kevin Nash was sent to hospital was a serious staph infection, which is a legit story and we wish Nash all the best. Jim Cornette & Mick Foley allowed the Main Event Mafia to find a suitable replacement. They picked…. Kip James. The crowd hated that, A LOT! The match initially ended in a double countout, but Jim Cornette came out and ordered a restart. Booker T protested, saying Cornette didn’t have the power to make that call. Mick Foley stepped up and said he had the power to restart the match, and also said it would be fought under Hardcore Rules! Mick Foley planted Scott Steiner with a double-arm DDT and pinned him to win the match!