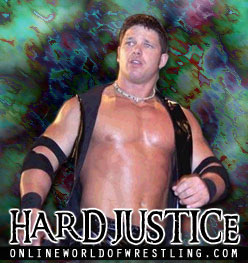 STEEL ASYLUM #1 CONTENDERS X-DIVISION MATCH
Christopher Daniels defeated SUICIDE and Jay Lethal and Consequences Creed and Chris Sabin and Alex Shelley and Amazing Red and Pope D’Angelo Dinero (Elijah Burke): This match earned numerous chants, including “this is awesome!” The object of the match was to climb up-side-down to a hole at the middle of the top of the cage, which is very difficult for someone who isn’t a top athlete.

$50,000 BOUNTY MATCH
Abyss defeated Jethro Holliday: Jethro Holliday was trying to cash in on the $50,000 bounty placed on the head of Abyss by Dr. Stevie.. Abyss avoided a shot with the brass knux and nailed Holliday with a Black Hole Slam for the win!

FEAST OR FIRED BRIEFCASE MATCH
Hernandez defeated Rob Terry (w/Brutus Magnus & Doug Williams) in 9 seconds: This match was for possession of the Feast of Fired briefcase, which contains a shot at the TNA World Heavyweight title – and technically belongs to Hernandez (but the British Invasion stole it!). It took Hernandez nine seconds to dispose of the British Invasion and shoulder-block Rob Terry for the 1-2-3. Hernandez took the briefcase and celebrated!

TAG TEAM MATCH WITH THE KNOCKOUT TITLE ON THE LINE
ODB & Cody Deaner defeated TNA Knockout champion Angelina Love & Velvet Sky w/Madison Rayne: Cody Deaner spanked Velvet Sky and got to kiss all three members of the Beautiful People. Madison Rayne tried to spray the Deaner’s eyes with hair-spray, but she missed and accidentally hit Sky in the face! The Deaner rolled up Velvet to win the match! Initially ODB was declared the new TNA Knockout champion, but Cody Deaner decided that he wanted the belt! The Deaner took the belt and ran, with an angry ODB giving chase! Velvet Sky yelled at Madison Rayne for costing the Beautiful People their championship..

BACKSTAGE SEGMENT: Kurt Angle presented Matt Morgan with a Main Event Mafia contract (if he helped the Mafia win tonight). They agreed to work together to take out Sting and shook hands..

TNA LEGENDS TITLE MATCH
Kevin Nash w/Traci Brooks defeated Mick Foley to win the TNA Legend’s title: By the end of the match, both wrestlers were bleeding and the referee was knocked out just before he was about to throw the match out. Mick Foley found a barbed wire baseball bat, but he bumped into Traci Brooks on the ring apron and Nash pinned him 1-2-3 to end a weak match. Nash took the barbed wire bat and smashed Foley with it! Nash went in for a second shot with the bat, but Abyss showed up with his own barbed wire bat to help Mick Foley!

TNA WORLD HEAVYWEIGHT TITLE 3-WAY
Kurt Angle defeated Sting and Matt Morgan to retain the TNA World Heavyweight title: Kurt Angle and Matt Morgan started working together, but eventually Angle double-crossed him! The finish say Angle swing a chair at Sting, but he missed and whacked Morgan by mistake – so he went ahead and pinned Matt Morgan for the win!