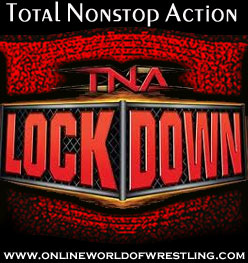 VIDEO PACKAGE: A nice video to show the main feuds going into Lockdown, one of TNA’s biggest events of the year.

ANNOUNCERS: Mike Tenay & Taz welcomed us to Lockdown live from Cincinnati, Ohio from the US Bank Arena. They showed glimpses of the crowd who looked pretty rowdy tonight. Some of the arena was blacked out, but it looked pretty packed. Every match is in the steel cage.

Ultimate Xscape  #1 Contender Match for the X-Division Title
Max Buck defeated Brian Kendrick & Jay Lethal & Amazing Red & Chris Sabin & Jeremy Buck & Suicide & Robbie E (w/ Cookie): The rules of the match were two men start off and you can tag in at any time, you are eliminated by pin-fall and when its the last two men the first one to escape the cage is the new number 1 contender. Suicide was eliminated first when he was pinned by Robbie E after some sort of foot/arm stomp. Jay Lethal was then eliminated by Amazing Red after the Code-Red and straight after Sabin eliminated Red with a brutal clothesline. Sabin and Max Buck fought and Sabin was pinned after Max hit him with a modified  Dudley-Dog from the top rope. The Buck brothers then fought and just when Jeremy took control he was pinned by Max after a small package. Kendrick who for the majority of the match meditating in the corner came in and cleaned house and eliminated Robbie E with a flying kick to the head. The last two were Max Buck and Brian Kendrick whoever escapes win the match. Kendrick was about to climb out when Max pushed the referee into the cage and Kendrick fell off, Max Buck then escaped the cage and won.

COMMENTATORS BOOTH
Mike Tenay & Taz welcomed us to Lockdown and previewed what is to come up later in the show. Eric Bischoff then came out.

IN RING SEGMENT
Eric Bischoff: Pointless segment and all Eric Bischoff said that he and Hogan promised they would get the TNA title back tonight.

BACKSTAGE INTERVIEW
Christy Hemme & Scott Steiner & Crimson: Scott Steiner said he has not evaluated his tag team opponents because they are punks, he praised the Cincinnati crowd and promised to kick ass!

FATAL FOUR WAY TAG TEAM STEEL CAGE MATCH
Ink. Inc ( Shannon Moore & Jesse Neal) defeated Scott Steiner & Crimson and The British Invasion ( Magnus & Douglas Williams) and Eric Young & Orlando Jordan: Crimson got the hot tag to Steiner who cleaned house on the British Invasion and Eric Young until Shannon Moore hit the blind tag on Steiner just as he was preparing for the frankensteiner.  EY hit Shannon then Williams hit EY from the top rope until Shannon hit a top rope moonsault onto Williams and nearly got the pin until Orlando Jordan came in and he hit Shannon Moore with the gender bender. He then got speared by Neal. Magnus hit Neal with the Michnokui driver and Steiner hit Magnus with a overhead belly to belly, then EY hit a top rope drop-kick on Steiner and escaped the cage for some reason. Moore hit Williams with a top rope neck-breaker for the win.

HAIR VERSUS TNA KNOCKOUTS TITLE STEEL CAGE MATCH
Mickie James defeated Madison Rayne to win the title: The match was over in thirty seconds. Mickie James had her shoulder taped because it is dislocated from a previous injury. You could see it was causing her allot of discomfort.

BACKSTAGE INTERVIEW
Christy Hemme & Matt Morgan: Matt Morgan said Hernandez has been a big pain in his ass and said after tonight he will go for the TNA title. Morgan promised to kick his head back to Mexico.

VIDEO PACKAGE: Samoa Joe versus “Pope” D Angelo Dinero feud. It started when Joe and Okada found out the Pope was a fake and started to follow him.

STEEL CAGE GRUDGE MATCH
Samoa Joe defeated “Pope” D Angelo Dinero by submission: After a decent bout between the two, Joe hit two muscle-busters and then made him tap to the rear-choke for the win.

STEEL CAGE GRUDGE MATCH
Matt Morgan defeated Hernandez (w/ Anarchia & Rosita & Sarita): Where have I seen this match? Oh that’s right Victory Road 2010. Morgan took control at the beginning until Anarchia held Morgan’s foot through the hole in the cage where the camera was in. Hernandez did a big splash. Matt Morgan fought back and threw Hernandez into the cage, and was preparing the carbon footprint when Anarchia started to climb in Morgan smacked him off the side of the cage, but Hernandez readied himself on the top rope and jumped off but Morgan hit a massive carbon footprint and got the win.

POST MATCH SEGMENT
Anarchia helped Hernandez to the back. Sarita and Rosita stayed in the ring and complained they were screwed by America and TNA. They called themselves the best, until Velvet Sky came out and cleaned house on them.

BACKSTAGE INTERVIEW
Christy Hemme & Karen Jarrett: Karen Jarrett said Jeff Jarrett is ultra everything and she is not worried about him facing Kurt Angle.

VIDEO PACKAGE: One of the most intense feuds in TNA, Jeff Jarrett versus Kurt Angle.

ULTRA MALE STEEL CAGE GRUDGE MATCH
Jeff Jarrett (w/ Karen Angle) defeated Kurt Angle: Karen Angle was sent to the back at the beginning. Its a 2/3 falls match: first fall submission, second fall pinfall and third escape the cage. Jarrett was in control early on locking numerous submission manoeuvres to no avail. Jarrett had Angle in a jujitsu arm bar but Angle reversed into a ankle lock and Jarrett tapped. One nil to Angle. Angle continued to dominate hitting various moves such as all kinds of suplexes and angle-slams, Jarrett kept on kicking out and Jarrett won the second fall when he rolled Angle up and used the tights. Kurt Angle was dominating and walked out the cage but decided to go back and give Jarrett more punishment. Jarrett decided to escape but Angle followed him, Jarrett then power-bombed Kurt Angle of the cage and he landed sickly on his neck, it looked very dangerous and he didn’t move for a few seconds. He got up and angle slammed Jarrett of the top rope. Angle then was starting to climb out when Gunner came out with a chair to prevent Angle escaping, suddenly Angle was on the corner of the cage and did a moonsault which actually missed Jarrett, Steiner came out and chased Gunner backstage.  Angle was leaving the cage vier the door when Karen Angle run down and sprayed Kurt Angle with something, Angle hit the ref and Jarrett was escaping when Angle put him in the ankle-lock but Karen Angle passed Jarrett the guitar and he smashed Angle on the head. Jarrett escaped again but Angle came back and put him in the ankle-lock but Karen used the cage door and it smacked Angle face-first and Jarrett escaped! Im disappointed Jarrett won this match. But Jarrett won the battle but Angle won the war!

COMMENTATORS BOOTH
Mike Tenay & Taz just recapped what happened and next up is the TNA World Heavyweight Championship Match.

TRIPLE THREAT TNA WORLD HEAVYWEIGHT CHAMPIONSHIP STEEL CAGE MATCH
“The Icon” Sting defeated Mr. Anderson and Rob Van Dam to retain the title: At the beginning RVD and Sting teamed up to gang on Mr. Anderson until Sting had Anderson in the scorpion death-drop and RVD attacked him. RVD hit the five star frog splash on Mr. Anderson, but Sting broke it up. Sting prepared RVD for the deathdrop when Anderson clotheslined him.All men were out when Hulk Hogan music hit and he came out with a pipe and gave it to RVD. RVD threw the pipe at Hogan, suddenly Anderson hit RVD with it and then Sting gave Anderson the deathdrop for the pinfall.

LETHAL LOCKDOWN MATCH
Fortune (“Fallen Angel” Christopher Daniels & Robert Roode & James Storm & Kazarian) defeated Immortal ( Ric Flair & “The Monster” Abyss & Bully-Ray & “Cold Blooded” Matt Hardy): Flair flirted with Broome Hogan at ringside. Kazarian and Abyss started things off. Immortal have the man advantage. Matt Hardy was in next but Kazarian hit him with a lovely leg-drop from the middle rope. Kazarian tried to hit Matt Hardy but he ducked and Abyss hit him and Hardy hit the ice-pick submission on Kazarian. Hardy hit Kazarian with a side effect. Daniels was in next and cleaned house he gave Abyss the BME ( Best Moonsalt ever) and continued to dominate. Ric Flair was in next. He gave chops and low blows to both members. James Storm was in next and Flair begged him not to do anything but Storm gave him the middle-finger and bashed him with the beer bottle and he juiced heavily. Bully-Ray was in next and just beat the crap out of Fortune with hard shots, Immortal took control. Robert Roode was last in and cleaned house. Beer Money hit the double suplex on Bully-Ray and did the beer money chant and the weapons suddenly began to lower down, Lethal Lockdown has begun. Fortune had all the weapons and just hit every member of Immortal. Daniels and Storm shoulder barged Abyss and he fell through the cage door. Matt Hardy went outside and started to climb the cage and Daniels followed him. On the top of the cage Daniels went for the hells-wings but Hardy backdropped him and he held onto the cage dangling in mid-air. Hardy hit Daniels with the twist of hate at the top and when he started to climb down Kazarian hit him with a drop-kick and he flew off. Flair was covered in blood, I actually felt sorry for him. Daniels from the top of the cage jumped onto Abyss and Matt Hardy outside..amazing! Roode put Flair in the figure four leglock but Bully-Ray came in and smashed a trash can onto Roode, he then hit everyone numerous times with a kendo-stick. Bully-Ray was going to hit Daniels one more time when A.J. Styles music hit and he came out and kicked Bully-Rays ass, Roode got Flair threw him in the cage Storm gave him a super-kick and Roode made Flair tap with the cross-arm bar submission. Brutal match!