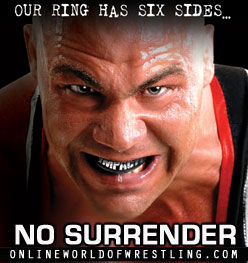 KNOCKOUTS TAG TEAM TITLE TOURNAMENT FINALS
Sarita & Taylor Wilde defeated The Beautiful People (Velvet Sky & Madison Rayne) to become the first ever TNA Knockouts Tag Team titles!: Madison Rayne replaced Angelina Love, who was released from her contract several weeks ago due to some work visa issues.. Mike Tenay’s words were: “because of business issues, Angelina Love and TNA have parted ways. The TNA family wishes Angelina the best in her future endeavers.” Naturally, Slick Johnson was the scheduled referee, because that makes the least possible sense. I spoke too soon, because Earl Hebner came down and relieved Johnson of his duties, so he couldn’t help the Beautiful People score a screwjob victory! Wait, the King of the Screwjob is the savior of fairness? Thank you TNA creative for not insulting our intelligence. There was no screwjob, and Sarita & Taylor used a Spring-board Dropkick by Sarita into a German-suplex by Taylor on Madison Rayne to became the first ever TNA Knockout’s Tag Team champions! Sarita is not used to performing for TV cameras, because she keeps turning away from the camera side – but Taylor was good at pointing her in the right direction during celebration moments..

GRUDGE MATCH
Hernandez defeated Eric Young: Eric Young wore a suit to the ring and refused to fight his “brother,” – saying he still wanted Hernandez to join World Elite. Hernandez hit all of his offense on Young, who simply took all the moves, including a Border Toss at the end of the match!

TNA X-DIVISION TITLE MATCH
Samoa Joe defeated Christopher Daniels to retain the TNA X-Division title: This match paled in comparison to their epic battles a few years ago. It just goes to show how changing ones gimmick to fit the TNA “style” can ruin a perfectly good wrestler. A series of reversals ended with Joe choking out Daniels to win the match!

BACKSTAGE SEGMENT: Jeremy Borash interviewed Mick Foley, who was upset that somebody destroyed the picture (usually hanging on the wall) of him and Jeremy Borash..

BACKSTAGE INTERVIEW: Lauren Brooke interviewed Pope D’Angelo Dinero about his match with SUICIDE.. SUICIDE showed up and attacked the Pope as he was preaching his beliefs and going on a bit long.. The referee rang the bell and ran to the parking lot to get a jump start on the Falls Count Anywhere match..

FALLS COUNT ANYWHERE MATCH
Pope D’Angelo Dinero defeated SUICIDE: They brawled in the backstage area for quite some time, and the Pope tried (and failed) to run SUICIDE over with a golf cart. The Pope tried to climb ove a fense but SUICIDE pulled him down by the tights and exposed the Pope’s butt. They fought into the iMPACT Zone and grappled inside the ring for the fans a little bit. Lots of dangerous stunts, including a stunt at the end of the match where SUIDIDE jumped off the top of the entrance tunnel, but missed and crashed through a table – leading to the pin.

BACKSTAGE INTERVIEW: Jeremy Borash interviewed TNA World champion Kurt Angle about facing “Big, Bad, Brainless” Matt Morgan. Angle said he tried to help Morgan, but now he is just going to end up another statistic. Angle said tonight will not have a happy ending, because tonight it’s going to be REAL…. it’s going to be DAMN REAL!

TNA LEGENDS TITLE MATCH
Kevin Nash defeated Abyss to retain the TNA Legend’s title: Mick Foley joined Mike Tenay & Taz on commentary for the match and also brought his barbed wire bat with him. Abyss was still wearing the blue flannel shirt, which was a gift to him from Foley. The referee had a bag with Dr. Stevie’s $50,000 inside for the bounty that was placed on the head of Abyss. Kevin Nash came to the ring and checked out the bag to make sure the money was all there, as everybody knows that money is all Nash cares about (in storyline and real life). Taz and Foley, both former WWE announcers, were making inside jokes about words they were not allowed to say while working for WWE. Midway through the match, Dr. Stevie took a seat on the stage to cheer for Nash and distract Abyss. Abyss was in control and Dr. Stevie walked down to ringside and got the referee’s attention. Daffney ran in and tried to use a taser on Abyss, but he gave her a Black Hole Slam instead (big pop!). Abyss picked up the taser, but Dr. Stevie jumped in and grabbed it. The referee literally escorted Dr. Stevie up the ramp, leaving the ring unsupervised. Nash destroyed Abyss with a chairshot, and the referee sprinted back for a 2-count. Abyss avoided the Jacknife and hit Nash with a Choke-slam! Abyss asked Foley to hand him the barbed wire bat. Foley was reluctant but handed the bat to Abyss barbed end first and Abyss dropped it when it pricked his finger. Kevin Nash picked up the taser and used it on Abyss’s crotch to pick up the victory.. Nash immediately went for Dr. Stevie’s bag of money but Stevie jumped in and grabbed the bag. Nash planted Stevie with a weak-looking power-bombed and left with the money and the TNA Legend’s championship.

BACKSTAGE INTERVIEW: Jeremy Borash interviewed TNA World Tag Team champions Scott Steiner & Booker T about not being able to get along with the British Invasion. Steiner cut a really tight promo threatening their partners to fall in line. Booker T’s promo, on the other hand, was not quite as entertaining.

LETHAL LOCKDOWN (WAR GAMES) MATCH
Team 3-D (Brothers Ray & Devon) & Beer Money Inc. (Robert Roode & James Storm) defeated The Main Event Mafia (Scott Steiner & Booker T) & The British Invasion (Brutus Magnus & Doug Williams w/Rob Terry): James Storm and Doug Williams started the match fighting at ringside before climbing into the six sides of steel. The heels won the advantage on iMPACT, so Brutus Magnus was next to enter the match at the 5:00 mark. Robert Roode was next, followed by Scott Steiner (who nailed Roode with a Frankensteiner! – which he only does on PPV), Brother Devon, Booker T, and finally Brother Ray. Rob Terry attacked Ray on the outside and knocked him over the guard rail. Terry whacked Ray with a chair and flexed his muscles. Terry then threatened the crew member controlling the roof and forced him to lower the roof of the cage with weapons! The Mafia & Invasion worked over Beer Money & Devon as Ray recovered and destroyed Terry with a chairshot at ringside before entering the cage and helping his teammates. Ray whacked all the heels with his chair a couple times over. Devon and Storm started pulling down trash cans from the ceiling. Brutus Magnus climbed up to the top of the cage, and James Storm followed him to fight on the roof! Robert Roode also made his way up there as well. Roode & Storm double-suplexed Magnus on top of the cage! The carnage escalated and the fans chanted “this is awesome!” Beer Money Inc. hit Doug Williams with the DWI for the victory..

BACKSTAGE INTERVIEW: Lauren Brooke interviewed Rhino about facing Bobby Lashley tonight, calling it the great challenge of Rhino’s career. Rhino said Lashley didn’t make any pre-match comments so he doesn’t look bad after the match.. Rhino cut a promo on Lashley, saying it was a wrestling match not an MMA match.. Rhino said they call him the War Machin because he’s an animal, he won’t quit or submit, feels no pain, and because he’s going to rip Lashley in half with a GORe! GORe! GORe!!

SINGLES MATCH
“The Boss” Bobby Lashley defeated “The War Machine” Rhino: Rhino went for the GORe but accidentally took out the referee. Then the bloody Rhino nailed Lashley with the GORe, but there was no referee to make the count. A second referee ran in for the count, but Lashley kicked out. Rhino went for another GORe, but Lashley avoided it and knocked Rhino out with one punch!

BACKSTAGE INTERVIEW: Jeremy Borash interviewed Sting & A.J. Styles about wrestling in the main event tonight. A.J. Styles said there was only one thing on his mind tonight, going out there and prooving that he is the best at what he does (is he taking notes for Chris Jericho). Sting asked A.J. if he was ready, and he said “I’m ready!” Sting said for one of them today will be the first day of the rest of our lives..

4-WAY (5-WAY) FOR THE TNA WORLD HEAVYWEIGHT TITLE
A.J. Styles defeated Kurt Angle (c) and Sting and Matt Morgan and Hernandez to win the TNA World Heavyweight title: After the four original participants of the match were introduced, Hernandez decided to cash in his Feast of Fired title shot and make it a five-way! Why wouldn’t he wait until after the match and cash it an a time that makes sense. Kurt Angle was pissed and yelled at Mike Tenay! Tenay said Hernandez told him that he wants to prove that he deserves the World title. Hernandez knocked Angle around for a bit while Sting, Styles, and Morgan stood there watching. Hernandez held up Angle for a 30 second standing suplex, and then clotheslined him over the top rope. The bell rang and Sting, Styles, and Morgan started grappling in the ring. Hernandez and Angle fought on the floor and up to the ramp, where Hernandez threatened to Border-toss Angle off the stage! Eric Young attacked Hernandez and gave him a Pile-driver on the hard metal stage! Hernandez was stretchered out and the match continued as a four-way. Despite their recent storyline, Angle and Morgan began to work together against Sting and Styles. A few minutes later, Sting hit a missile drop-kick and the crowd chanted “you still got it!” Late in the match, Angle reversed the Scorpion Deathlock and put Sting in the Anklelock. Matt Morgan knocked Angle out cold with a stiff Carbon Footprint! Morgan charged at Sting, who moved and sent Morgan flying over the top rope. Sting and A.J. Styles were left in the ring with an unconcious Kurt Angle. Sting made eye contact with A.J. Styles and left the ring, taking out Morgan with a dive off the ring apron! A.J. Styles hit Angle with the Springboard 450 and pinned him to win the TNA World Heavyweight title!!! Big celebration with a large group of fans and Christopher Daniels congratulating his best friend in the ring…