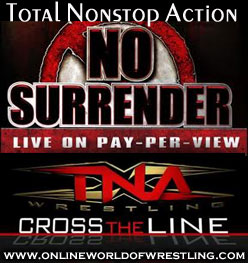 IMPACT ZONE SEGMENT: Jesse Neal was in his sailors suit along with the roster and referees.. They did a 10 bell salute to the people who lost their lives on September 11th 2001.

#1 CONTENDERS MATCH FOR X-DIVISION TITLE
Jesse Sorenson defeated Kid Kash: Sorenson is very green in the ring and it showed tonight. He won with a inverted DDT.

BACKSTAGE SEGMENT
Jeremy Borash & Kurt Angle & Hulk Hogan: Kurt Angle said the reason why he joined Immortal was to protect himself and now he has to defend his title in three way. Hulk Hogan said he is ready and will win tonight

BOUND FOR GLORY SERIES SEMI FINAL #1
Bully-Ray defeated James Storm by DQ: Storm needed to win by Submission to finish in the top two, Storm made Bully-Ray tap but he sprayed beer in the referee’s face so the ref awarded the win to Bully-Ray. Post Match So Cal Val asked Bully-Ray for some comments he told her to shut up and get out of his face, calling her a stupid bitch. Ray asks the fans if they believe him now. He tells us his name over and over and says he’s from Hells Kitchen and the next World Heavyweight mother friggin champion.

BACKSTAGE INTERVIEW
Jeremy Borash & Gunner + Bully-Ray: Gunner said he needs to win by submission to get into the final and do whatever it takes. Bully-Ray said he better not give up, Gunner walked off,Bully-Ray said he loves bullying and its good.

BACKSTAGE INTERVIEW
Jeremy Borash & Mr. Anderson: Mr. Anderson said he does nott like JB but they do both hate Immortal.

BACKSTAGE INTERVIEW
Jeremy Borash & Beer Money ( Bobby Roode & James Storm): Bobby Roode said it’s time for him to face his dream, make Gunner tap and defeat Bully-Ray. James Storm said he wanted them to face one on one but it wasn’t too be.

BOUND FOR GLORY SERIES SEMI FINAL MATCH #2
Bobby Roode defeated Gunner by Submission: Really good match, Roode made Gunner tap out to the crippler crossface. After the match Eric Bischoff came out afterwards and said the final of BFG series will be contested tonight.

BACKSTAGE INTERVIEW
Jeremy Borash & Austin Aries: Austin Aries said Aries the time for talk is over. Aries says all Brien Kendrick’s philosophical rants are meaningless, It’s time for Total Nonstop Aries, he says. Aries says Kendrick is a world class athlete and will bring his A game tonight. Aries said that won’t be good enough because tonight, he’s bringing his A-double game. Aries says everyone will see tonight why he’s the greatest man alive and he will become the first & the last X Division Champion. I love listening to Aries.

BACKSTAGE INTERVIEW
Jeremy Borash & Bully-Ray: Bully-Ray told JB that tonight isn’t about his tag team success, it’s about one more match that he has to win to get the opportunity to wrestle for the World Title. Ray says he can’t be beat and can’t be stopped. Ray points out Bound For Glory is in Philadelphia and his chances are pretty good against Roode. Ray says he’s coming for Roode’s hurt neck, then he’s going to piss off the wrestling world. Learn to love it because Bully Ray is the next World Heavyweight Champion. I love listening to him as well.

BOUND FOR GLORY SERIES FINAL
Bobby Roode defeated Bully-Ray to win The Bound For Glory Series: A lot of stalling by Bully-Ray for the first few minutes. Roode won with a spinebuster and after the crowd went crazy. He celebrated with the fans. Him versus Kurt Angle at Bound For Glory.

BACKSTAGE INTERVIEW
Jeremy Borash & Rosita: JB introduced Rosita who’s father passed away on 9/11. She spoke about how it affected her.