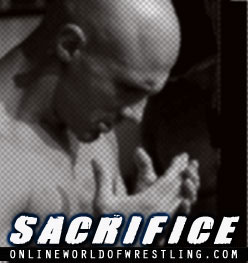 TNA KNOCKOUT MONSTERS BALL MATCH
Taylor Wilde defeated Daffney w/Abyss: After the match, Dr. Stevie poured a couple bags of thumb tacks in the middle of the ring and told Abyss to drop Wilde on top of them! Lauren Brooke ran down to talk some sense into Abyss, who was about to ovey Dr. Stevie’s orders. Dr. Stevie shoved Lauren down, and Abyss snapped and choke-slammed Stevie onto the tacks!

TNA X-DIVISION TITLE MATCH
TNA X-Division champion SUICIDE vs. Christopher Daniels ended in a draw: Don West was hilarious on commentary, claiming the match was a set-up and that SUICIDE was actually Christopher Daniels, and Daniels payed a jobber to wrestle under the mask so he could win the X-Division title. Daniels initially captured the championship after the Motor City Machine Guns interfered against SUICIDE. Daniels saw the replay and refused the title, before asking for five more minutes. SUICIDE agreed (why wouldn’t he?). Time ran out and SUICIDE retained the X-Division title. Don West claimed that SUICIDE double-crossed Daniels by not letting him win. Meanwhile, back in reality (well, wrestling reality) SUICIDE and Daniels shook hands out of respect for one another..

TNA KNOCKOUT STRETCHER MATCH
Angelina Love defeated Awesome Kong w/Raisha Saed to retain the TNA Knockout title: Angelina Love tried to run-away multiple times but she was blocked by Raisha Saed. A few minutes later, Love dodged Kong and Saed was knocked off the ring apron. The referee checked on Saed (why?) while Love sprayed Kong’s eyes with hair-spray and rolled her up for the 1-2-3. After the match, Kong went nuts with a couple of Implant-busters..

TNA LEGENDS TITLE I QUIT MATCH
A.J. Styles defeated Booker T to retain the TNA Legend’s title: Sharmell showed up late in the match to route for Booker T, but ended up getting knocked off the ring apron by accident. Booker T refused to submit, so Jenna Morasca ran out and threw the towel in to end the match. Booker T & Sharmell were pissed that Morasca would do such a thing!

ULTIMATE SACRIFICE – TNA WORLD HEAVYWEIGHT TITLE 4-WAY
Sting defeated TNA World champion Mick Foley and Kurt Angle and Jeff Jarrett: Mick Foley put his championship on the line. Sting put his career on the line. Kurt Angle put his status as “Godfather” of the Main Event Mafia on the line. Jeff Jarrett put his control of TNA on the line. Whoever got pinned would lose what they were willing to sacrifice. Sting pinned Kurt Angle to win the match and also becomes the leader (Angle’s status as “Godfather”) of the Main Event Mafia. It turned out to be a strange stipulation, that since Foley was not pinned he did not lose the item that he put on the line, which was the TNA World Heavyweight title.