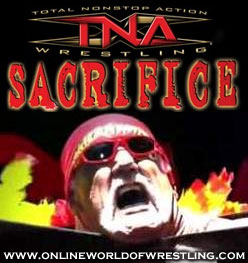 TAG TEAM #1 CONTENDERS 3-WAY
The Machine Guns (Chris Sabin & Alex Shelley) defeated Beer Money Inc. (Robert Roode & James Storm) and Team 3-D (Brothers Ray & Devon): The finish saw Team 3-D hit Robert Roode with the Doomsay Device, but Chris Sabin hit Brother Ray with a Spring-board Cross-body. Team 3-D set up for a 3-D on Roode but Storm spit beer in Ray’s face! Devon went after Storm, while Roode took out Ray in the ring. Suddenly the Guns were back in the ring and they finish off Brother Ray to become the new number one contenders to the tag team championship!

RINGSIDE SEGMENT: Mike Tenay & Tazz talked about what Desmond Wolfe & Chelsea did to Abyss on iMPACT – trying to get him arrested for assaulting Chelsea. Tazz simply said that it was not COOL.

TNA GLOGAL TITLE MATCH
“The Freak” Rob Terry defeated Orlando Jordan to retain the TNA Global title: The match was short but still felt like it went too long. Jordan was in control, until he climbed to the second rope, lowered his knee pad, and wasted too much time. Big Rob moved and avoided the impact, then hit Jordan with the Freak-buster to retain his championship! After the match, Jordan attacked Big Rob and bashed his knee into the Global title belt! Tazz warned everyone to not be fooled by his “persona” because he is a dangerous and violent man.

BACKSTAGE SEGMENT
Team 3-D (Brothers Ray & Devon) + Ink Inc. (Shannon Moore & Jesse Neal): Team 3-D were pissed about James Storm spitting beer in Ray’s face. Ink Inc. came in to kiss some 3-D butt get some last minute advice from Jesse Neal’s mentors. Team 3-D warned the boys to watch out for the Band because they can’t be trusted. Neal told them he would take care of Team 3-D. Ray was upset that their protege had the audacity to say he would take care of THEM?

TNA X-DIVISION TITLE MATCH
Doug Williams defeated Frankie Kazarian to win the TNA X-Division title: This had the potential to steal the show. Doug Williams was stripped of the title last month, but still claims to be champion, and refuses to relinquish possession of the belt. Kazarian won the vacant title at the PPV last month and was defending the belt here at Sacrifice. Kazarian had “RIP RJD” on his wrist tape, which was a shout-out to Black Sabbath heavy metal rocker Ronnie James Dio, who passed away that day. Williams almost killed Kazarian with a Power-bomb in the corner but misjudged the distance so Kazarian landed on the mat with the back of his head. He recovered and hit the Flux Capacitor (or whatever they call it this week). Williams also recovered and hit the Chaos Theory moments later to recapture the TNA X-Division title!

BACKSTAGE SEGMENT
Desmond Wolfe & Chelsea: Chelsea was upset about the prospect of spending 30 days with Abyss if he wins tonight. Chelsea was worried about what their stunt would do to Abyss. Chelsea said she didn’t want the ring any more and begged Wolfe to call off the match. Wolfe said this week the TNA rankings will be released and if he wins he will be on top of the list. Wolfe said it wasn’t about her, but was about HIM!

TNA KNOCKOUT TITLE MATCH
Madison Rayne (w/Velvet Sky & Lacey Von Erich) defeated Tara to retain the TNA Knockout title: The referee wisely sent Velvet & Lacey backstage before the match. That’s referee Earl Hebner, NOT referee Slick Johnson (who the Beautiful People often have in their back pocket). Late in the match, Tara hit a moonsault but only got a two-count. She started to get emotional. Tara went for a second moonsault, but Madison moved and then hit her own awkward finisher for the win! Madison retains her Knockout title and Tara loses her “career.” After the match, Madison sarcastically waved good-bye to Tara as she exited. Tara rose to her feet and was given a standing ovation as she took out her pet tarantula and raised it above her head. Some security guys came out and forced Tara to leave the ring before she was finished soaking up the fan reaction.

BACKSTAGE INTERVIEW
Christy Hemme & The Band (Kevin Nash & Scott Hall & Eric Young): Eric Young said there was no one else in TNA smart enough or cool enough to hang with the Band than him. Scott Hall said he was the first person to doubt Eric Young, but he stepped up big time. Hall said it wasn’t show-friends, it was show-business, and flashed the Wolfpac sign to Young. Kevin Nash said they were defending the titles under the Freebird rule, which means any two of the three of them could defend the tag team titles. Tonight it will be Kevin Nash & Scott Hall, so Eric Young said he would go and put the beer on ice.

TNA WORLD TAG TEAM TITLE MATCH
The Band (Kevin Nash & Scott Hall) defeated Ink Inc. (Shannon Moore & Jesse Neal) to retain the TNA World Tag Team titles: Kevin Nash took forever walking to the ring, and Scott Hall was about 12 steps behind him. It was an understandably horrible match, with Ink Inc. bumping a lot for both Hall & Nash. The finish saw the referee get knocked out and Eric Young ran down to toss a singapore cane in to Kevin Nash. Jesse Neal knocked Young off the apron and speared Nash! Neal grabbed the cane and prepared to destroy Nash. Young prevented that from happening by grabbing the cane out of Neal’s hands. Suddenly Brother Ray tackled Young from behind like a “freakin freight train!” Ray blasted Young a couple times with the cane and then entered the ring and yelled at the unconcious Nash. Ray then turned around and whacked Jesse Neal with the cane before leaving the ring w ith a scowl on his face. Young pulled Nash on top of Neal for the 1-2-3 so that the Band would retain their World Tag Team titles!

CHELSEA FOR 30 DAYS vs. THE HALL OF FAME RING
Abyss defeated Desmond Wolfe (Cheslea on the line vs. HOF Ring): Chelsea was given a chair to sit on the ramp and watch the match, but all she wanted to do was sneak away. It was a suprisingly short match, until Chelsea slid a box into the ring. Wolfe opened it and found some brass knux, which he used on Abyss, but could not secure the win. The match ended with Abyss giving Wolfe a Black Hole Slam and winning the services of Chelsea for 30 days – starting this Thursday on iMPACT! Abyss got out of the ring and approached the terrified Chelsea and told her “I’ll see you on Thursday!” Wolfe crawled out of the ring as Chelsea was taken away by referee Earl Hebner..

GRUDGE MATCH
“The Charismatic Enigma” Jeff Hardy defeated Mr. Anderson: Mr. Anderson had his ribs taped from taking the Swanton-bomb through the table on iMPACT. They started out brawling as the fans amused themselves by making up special chants using the word “asshole.” Midway though the match, Hardy back-dropped Anderson over the top rope onto the elevated stage. Hardy recovered and ran down the ramp knocking Anderson back into the ring. Moments later, Mr. Anderson went for the Green Bay Plunge but fell on his face instead. Hardy climbed to the top rope and hit the Swanton-bomb for the clean victory! Anderson got up and offered to shake Hardy’s hand – but Hardy wisely declined to shake hands with a self-proclaimed “asshole.”

BACKSTAGE INTERVIEW
Christy Hemme & A.J. Styles & Ric Flair: Ric Flair said he was confident that A.J. Styles would recapture the World Heavyweight title, but why not ask the man himself. Hemme talked to Styles, who ran down Rob Van Dam’s chararacter and bragged about being the longest reigning World Heavyweight champion. Styles said he would win back his title and RVD can do two things; nothing and LIKE IT!

GRUDGE MATCH
“The ICON” Sting defeated “TNA Founder” Jeff Jarrett: Sting attacked Jeff Jarrett backstage with a baseball bat and put Jarrett’s shoulder out of the socket. Jarrett ended up bleeding profusely from the forehead. They ended up brawling on the stage and Sting didn’t even remove his leather trench coat. Sting implied that he was going off script with his assault on the TNA founder. Sting ripped the ring steps off and placed Jarrett chest-down on them. Sting bashed Jarrett’s knee with the baseball bat and then continued to assault the shoulder. Sting shoved the bloody Jarrett into the ring and pinned him to win the match without even taking off his jacket.

POST MATCH SEGMENT
Sting & Jeff Jarrett + Hulk Hogan: Mike Tenay asked why Sting wouldn’t give an answer as to why he went over to the dark side after all these years. Sting grabbed the mic and said “you want to play the deception game, Jeff? You’re no different than those guys – and they’re gonna pay just like you paid tonight!” Tenay remarked “just when you thought you would get answers from Sting, you get more questions.” Jarrett was stretchered out, but Sting attacked him again and knocked the stretcher over…. Suddenly, Hulk Hogan made his way out as Sting backed into the ring and waited. Hogan checked on Jarrett and Sting snuck out the other side of the ramp. Hogan followed the stretcher as it was pushed out of the iMPACT Zone.

BACKSTAGE INTERVIEW
Christy Hemme & TNA World Heavyweight champion Rob Van Dam: Rob Van Dam said he’s held a lot of championships, but he’s never cared about holding a title until he held the TNA championship – because it represents everything he is about. RVD said a lot more people are going to tune in to watch A.J. Styles get his ass kicked if he wants to keep coming after him.

TNA WORLD HEAVYWEIGHT TITLE MATCH
Rob Van Dam defeated A.J. Styles w/Ric Flair to retain the TNA World Heavyweight title: Referee Earl Hebner ejected Ric Flair from ringside after he grabbed RVD’s leg from outside the ring. Flair came back and joined Mike Tenay & Tazz on commentary for the rest of the match. Flair tried to interfere later, but “Black Machismo” Jay Lethal (wearing a suit) showed up to take him out with a low-blow, some chops, and a figure four! Meanwhile in the ring, Styles went for a superplex, but RVD countered and dropped him face-first on the top rope! RVD hit the frog splash and pinned Styles to retain the TNA championship!