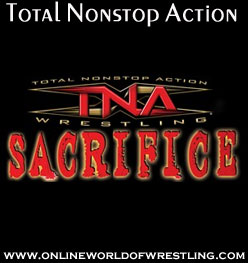 IN THE RING
Jeff Jarrett & Karen Jarrett (on crutches) + Mick Foley: Jeff claimed Karen suffered an ankle injury at home and that the mixed tag team match against Kurt Angle & Chyna tonight was OFF. Network representative Mick Foley came out and said he saw the x-ray but it was an x-ray of a man not a woman so the Jarrett’s were lieing. Karen took off her protective boot and threw it at Foley. Karen tried to get out of the match again by saying she didn’t have gear, but the TNA seamstress brought out an outfit for Karen to wear.

BACKSTAGE INTERVIEW
Tara & Madison Rayne: Tara was asked who she was routing for tonight. Before she could answer, Madison Rayne interrupted and insulted Tara. Madison ordered Tara to stay in the back tonight!

TNA KNOCKOUT TITLE VS TARA’S FREEDOM MATCH
Mickie James defeated Madison Rayne to retain the TNA Knockout title and to win Tara’s freedom: Tara came out with a loaded glove and didn’t know which one she was going to hit, but ended up smacking Madison and allowing Mickie to win the match!

TNA TAG TEAM TITLE MATCH
Beer Money (Robert Roode & James Storm) defeated Matt Hardy & Chris Harris to retain the TNA Tag Team titles: They focused on the heat between former America’s Most Wanted partners James Storm and Chris Harris – but the crowd didn’t really care. Beer Money set up for the DWI but Storm changed the plan and they used the old AMW Death Sentance on Harris for the win!

NO DQ MATCH
Tommy Dreamer defeated A.J. Styles: Bully Ray broke up the Styles Clash and reamed A.J. in the back of the head. Dreamer followed up with a Pile-driver threw a table for the win!

MIXED TAG TEAM MATCH
Kurt Angle & Chyna defeated Jeff Jarrett & Karen Jarrett: Karen avoided the match as much as she could, but eventually had to get in the ring with Chyna. Chyna hit Karen with a clothesline, a Pedigree, and then applied the Anklelock. Jeff tried to intervene but he ended up in Kurt’s Anklelock for the finish.